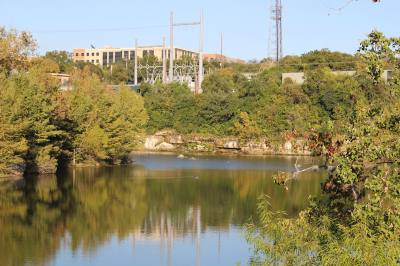 Southwestern Travis County is one of the only areas without a groundwater conservation district within the Trinity Aquifer, one of nine major groundwater supplies in the state.

Groundwater, which refers to water found under the earth’s surface, supplies about 60 percent of the water used in the state, said Larry French, director of Texas Water Development Board's groundwater division, which oversees state and regional groundwater planning.

In a January report to the 85th Legislature, the Texas Commission on Environmental Quality recommended that a groundwater conservation district be created in southwestern Travis County to further protect the Trinity Aquifer.

State Rep. Paul Workman, R-Austin, filed House Bill 922 on Jan. 11 to establish a groundwater conservation district in the area, his third such attempt in three sessions as a legislator, he said.

“[As] part of the Trinity Aquifer, we need to make sure the aquifer is not overdrawn,” Workman said. “A groundwater conservation district will make sure that the water is managed and that we don’t get in a situation where a company tries to put a big straw in the ground and take a bunch [of water] out when there [are not any regulations].” Groundwater conservation districts protect areas with high groundwater production in which unregulated pumping could have a negative impact on an aquifer or the surrounding area, French said.

“There are a lot of places where there’s water in the ground, but what conservation districts really focus on is aquifers, where groundwater is found in sufficient, useable quantities,” he said.

In Texas, “rule of capture” gives possession of groundwater to the owner of the land above it, French said. A landowner has the right to drill for as much water as he or she needs as long as the water use is not deemed wasteful or abusive, he said.

“Groundwater conservation districts have the authority to modify that rule of capture by imposing limits to pumping, requiring certain spacing between pumps and so on,” French said. “When you don’t have a [conservation district], there is no restriction on how much you can take or where you can put a well.”

Groundwater conservation, preservation or planning functions do not occur unless an area is in a conservation district, TCEQ spokesperson Andrea Morrow said.

Is a conservation district needed?

“With an issue like groundwater there are going to be a number of diverse interests,” French said. “Some people are going to feel like the [groundwater] districts are overprotective, and some will feel the district is too open. If you are interested in producing a sizable amount of water, you may have restrictions if a district is in place. It depends on which side of the spectrum you’re on.”

Morrow said that southwestern Travis County is the only area located within the Hill Country Priority Groundwater Management Area that lacks a state groundwater conservation district. If approved, the district would take part in a joint planning effort with others in the HCPGMA to manage the resource, Morrow said.

“We need a groundwater conservation district in western Travis County,” Precinct 3 County Commissioner Gerald Daugherty said. “I know we have straws out there [taking groundwater], and the delivery of surface water can get problematic when Lake Travis is 50 feet down. We need to manage this groundwater, and I’m 100 percent supportive of this bill.”

Specifics of the proposed district

According to the proposal, the Southwest Travis County Groundwater Conservation District would encompass all of Travis County south of the Colorado River and west of the Barton Springs/Edwards Aquifer Conservation District's border, which runs southwest from the Colorado River along Westlake Drive and Camp Craft Road in West Lake Hills. The district would be roughly 200 square miles, making it one of the smaller districts in the state.

“The proposed district would be smaller than most,” French said. “Quite a few districts are county-size, and some are much larger multi-county districts.”

Exempt wells include those for single-family household use and conventional farming activities, the bill states.

“The bill won’t affect individual landowners whose wells are exempt,” Workman said. “It’s really about commercial users who could draw a lot of water out of the Trinity Aquifer.”

The bill also states taxes cannot be collected by the district.

The district would be managed by a seven-person board of directors, who would be elected May 2018 by residents in the district, the bill states. There would be seats for a director from Lakeway, Bee Cave and West Lake Hills, Workman said.

According to the bill, an initial board would be composed of appointees by Travis County Judge Sarah Eckhardt; Workman; state Sen. Dawn Buckingham, R-Lakeway; and Daugherty, whose precinct falls within the district.

If the Legislature passes the bill and it is signed into law, it would take effect Sept. 1.

Ed McCarthy, an Austin-based water lawyer who represents the Shield Ranch nature conservation area in Travis County, said the ranch opposes the bill because the district’s small size could hinder its ability to be economically sustainable.

“The reality is that the number of nonexcept wells in the area is 80, and those are the only wells that would be subject to production payments,” he said. “An economically unstable district creates more problems than no district at all.”

McCarthy said his clients would support an ad valorem property tax to accompany the fees proposed in Workman’s bill.

“An ad valorem tax would never pass in western Travis County,” Workman said. “The district is going to have to have money to get organized and to operate, and there are provisions that will provide some funding for that.  We’re hopeful other local entities would help out with funds to help protect that aquifer.” Daugherty said Commissioners Court has discussed putting money toward the district in the event that additional funds are needed.

“We did have a discussion that there could potentially be a lack of funds with the setup that [Workman presented],” he said. “Some may say I’m the tightest on the budget in Travis County, but I’ve always said there are things a county should spend money for, and it’s time for us to do something with a groundwater conservation district in western Travis County.”

McCarthy said he does not believe Travis County is a guaranteed long-term source of revenue for the district,  pointing to nearby Hays County withdrawing its funding to the Hays Trinity Groundwater Conservation District as an example.

“There are other districts in this part of the state that [do not have] the financial stability to keep the doors open, let alone contribute to science and provide for the overall regional management,” he said. “While [my client] opposes the bill, they fully support groundwater regulation.”

If established, Workman said the district would pursue a loan from the TWDB, which offers loans for districts that are in their initial stages.

As of April 10, Workman's bill had been considered by the House at a public hearing, and was reported favorably by the Texas Local and Consent Calendars Committee.