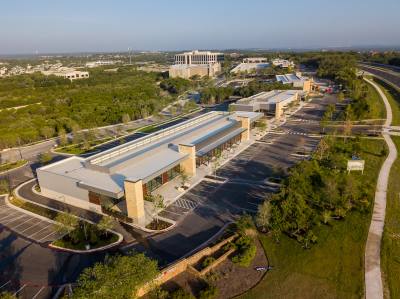 “Lantana Place is the first large retail center of its kind on Southwest Parkway and the developer has incorporated a very high level of exterior design providing a strong sense of place in this largely underserved retail market,” CBRE Senior Vice President Eric DeJernett said in the release. “This is an incredible location for a wide variety of retailers as they are within close proximity to a large population of both residential and office tenants and this is, currently, the only large retail establishment in the area.”

Lux Rox is an apparel and jewelry boutique that opened in Lantana Place on April 30. The store was previously located at 6317 Bee Caves Road, Ste. 210, Austin, before moving to the new spot.

National chain Orangetheory Fitness, which has over 20 gyms in the Greater Austin area, plans to open the new Lantana Place location July 13, according to an Orangetheory representative.

Lantana Nail & Spa will offer manicures and pedicures, and customers are also offered up to two complementary drinks during an appointment, such as wine, champagne, mimosas, soft drinks and water.

Black Rock Coffee Bar is a national coffee chain with close to 50 locations throughout the country. According to the company’s website, it does not currently operate any bars in Texas.

Last winter, the first round of tenants for Lantana Place were announced, many of which have opened in the months since. Tenants include Carve American Grille by Perry’s, Westlake Dermatology, Realty Austin, Cobalt Blue Salon, Scissors & Scotch, Marigold Market, Enamel Dental and Lone Star Eye.
SHARE THIS STORY

Increased police staffing, improved EMS availability, and state or federal action on gun violence prevention are among the proposals floated in the wake of the weekend shooting.

Commissioners voted unanimously to postpone any design or construction of new jail facilities for at least a year while staff re-evaluate the Travis County correctional system's needs.

Austin Proposition B enforcement shifts from education to warnings

Austin officials on June 15 provided an update on enforcement and outreach work by city staff and the Austin Police Department with the second phase of Proposition B camping ban enforcement now underway.