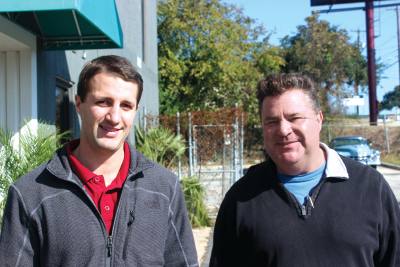 In 1979, Don Twomey was repairing cars behind the Sigma Chi fraternity house at The University of Texas-Austin. Nearly 40 years later he is still fixing cars—in a South Austin collision and auto body repair shop that bears his name.

“This is something I grew up doing—tinkering with cars,” Twomey said. “Some people are just born to be car people, and I guess I’m one of them.”

He said he started Twomey Auto Works from the ground up, with little money and simple equipment.

After 39 years in the business, Twomey Auto Works specializes in repairing cars that have been damaged in a collision, dinged or scraped. Common services at the shop include fixing dents, hail damage, paint and frame straightening jobs.

Twomey also restores classic cars. He is working on a 1953 Cadillac and 1967 El Camino, he said.

His son, Tanner, works at the shop as well. Like his father, Tanner said he grew up tinkering with cars and spending his summers learning the trade.

“We’re trying to grow this as a family business,” Don Twomey said. “We started with a one-and-a-half car garage and expanded and expanded. There are 20 overhead doors now.”

The Twomeys recently purchased a new lift, upgraded alignment machinery and a chamber for auto body painting. The new and upgraded equipment arrived on the heels of a move this fall to 4930 S. Congress Ave., 4 miles south of the previous shop.

“We lost our lease,” Twomey said. “It got caught up in all that new development. We were getting pushed out.”

Twomey has moved locations before. The shop has been located on North Lamar Boulevard, Anderson Lane, and 12th and Lamar throughout the years. But after 28 years at 1009 S. Congress Ave., Twomey said the surrounding developments were so dense, it was difficult to operate a car shop on about a quarter of an acre.

The new building is bigger—sitting on multiple acres—and offers ample parking, a storage lot in the back and a parts delivery room.

“You know how good things sometimes come out of bad things? Getting run out ended up somewhat nicely,” he said.