Ashton Woods Homes is planning a 375-unit residential community on 100 acres at the north end of a property known as the Cannon Tract. (Site plan courtesy the city of Dripping Springs)

Two separate residential projects being planned in Dripping Springs could bring a total of 1,348 new single-family homes, 91 acres of parkland and needed infrastructure to the city's residential core.

Dripping Springs City Council on Jan. 12 received updates on two proposed concept plans for separate projects northeast of downtown—Wildridge and Cannon Ranch. Both projects will be reviewed by the city’s development and oversight boards in the coming months, and official development plans will return to council in the future.

Previously known as the Cynosure project, the current proposal for the Wildridge neighborhood includes 973 single-family homes on a 283-acre track north of the Blue Blazes Ranch property at 1601 W. Hwy. 290.
RELATED STORIES 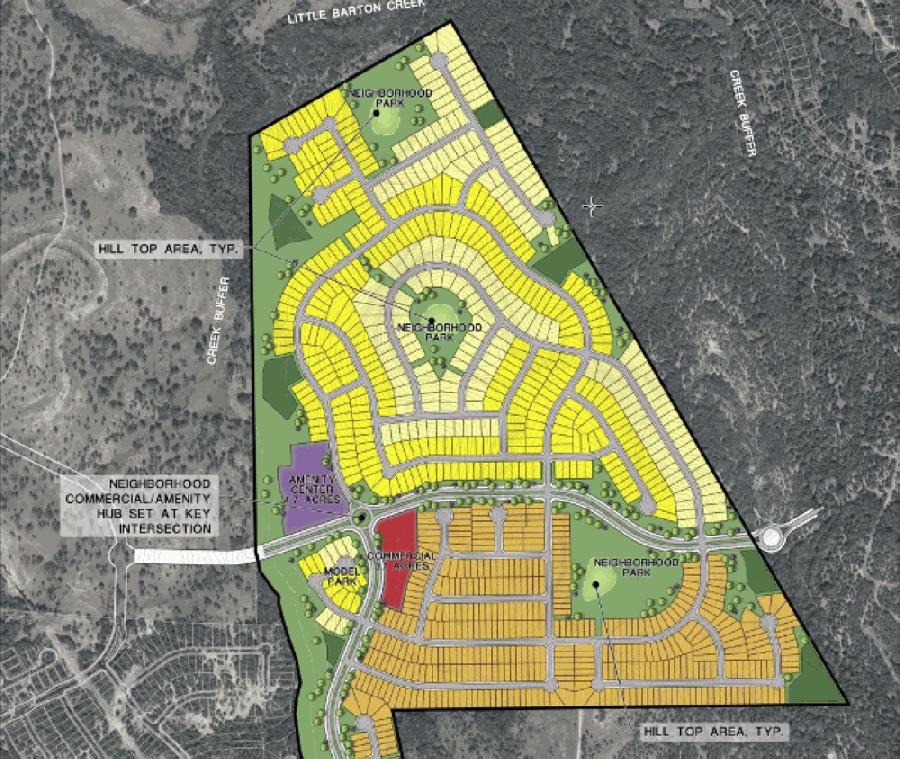 According to the plan, 67 acres will be used as park space, with trails connecting to the future Rathgeber Natural Resource Park to the east of the community. A small retail component is also included in the preliminary plans.

The project is being planned by Meritage Homes, which previously worked with Dripping Springs in developing the Big Sky Ranch and Heritage Village neighborhoods.

Meritage Homes spokesperson Pete Verdicchio said he believes the project would benefit the city by introducing infrastructure that could help address growth across the region. The project would be planned as a municipal utility district, which would allow the developer to finance needed infrastructure, including roads, water and wastewater systems.

“We feel like we've designed this project with a mix of product and density that enables the project to take a key role in the development of the core area [of Dripping Springs] and all of the major infrastructures associated with that,” he said.

Roadways within the development would include a four-lane east-to-west arterial road that was drawn with the city's transportation master plan in mind, Verdicchio said. The community would also create additional access to a future Dripping Springs combined elementary and middle school that is proposed for the area.

Mayor Pro Tem Taline Manassian said she worries about projects such as Wildridge that are high density because they change the character of Dripping Springs.

“What are we setting the stage for with the overall density [in the city]? I don’t know,” she said.

Located north of West Hwy. 290, Ashton Woods Homes is planning a 375-unit residential community on 100 acres at the north end of a property known as the Cannon Tract. The community would also have 24 acres of parkland dedicated to the city and a neighborhood trail system that would connect to Founders Park and downtown Dripping Springs, according to the proposed concept plan. 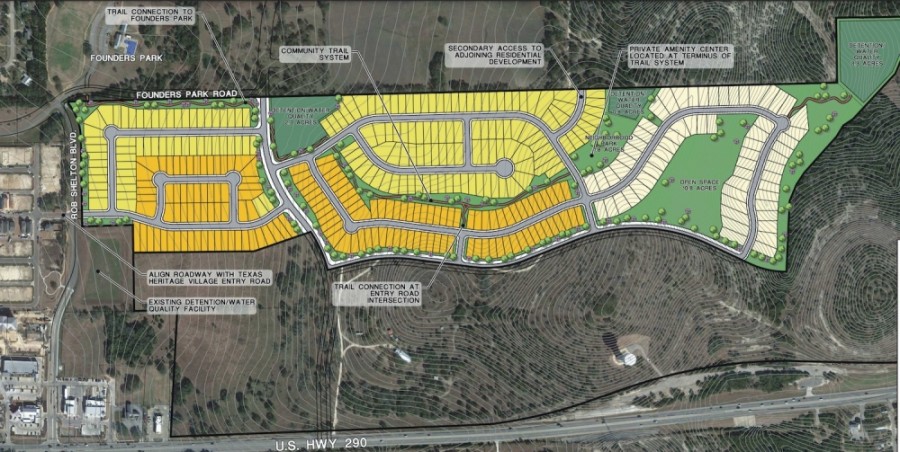 Ashton Woods Homes spokesperson Steven Pierce said the developer has been working with the city since late 2019 to plan the proposed development, which will ultimately need to be approved by City Council through a planned development district agreement.

The current proposal shows less density compared to earlier plans, with a 24-home reduction resulting in an average of 4.1 lots per acre in the community, Pierce said.

The developer would also create new roads that could be used for traffic to cut through and bypass sections of downtown, including a connection with the existing Rob Shelton Boulevard, a connection with Big Sky Ranch to the north and two connections with West Hwy. 290 to the south.

“This has been our attempt to try to retain what we think is needed for the project from a density standpoint while also accommodating some feedback that we're hearing from the city and staff [that] maybe it was too dense,” Pierce said. “We're trying to make an effort here to move this thing forward, and hopefully this can garner some more support with the city.”

Council Member April Harris Allison said she was impressed with the plan, including the walkability of the neighborhood, but still hopes for less density in the final proposal.

Mayor Bill Foulds thanked the developer for reducing density based on the city’s previous feedback.