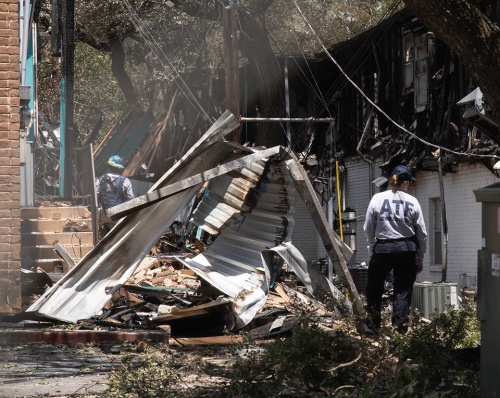 Agents from the Bureau of Alcohol, Tobacco, Firearms and Explosives investigate the San Marcos apartment complex fire on Saturday afternoon.

Justice of the Peace Maggie H. Moreno declared the victims deceased at the scene. They have been transported to the Travis County Medical Examiner's office for autopsy and identification.

Listed as missing on Friday afternoon were James Miranda, Haley Frizzell, Belinda Moats, David Ortiz and Dru Estes. The city set a special hotline at 512-754-2291 for information on any of the missing.

The fire, reported at 4:27 a.m. Friday, destroyed 110 apartments and left more than 200 residents without a home. Most of the residents were students at Texas State.

One of the residents, Melody Ito, a junior, told Community Impact Newspaper that as she fled her burning apartment, she saw people jumping from the windows of second-floor units.

Building L at Vintage Pads Apartments was also damaged by the fire.

On Friday, San Marcos Fire Marshal Kelly Kistner said the Bureau of Alcohol, Tobacco, Firearms and Explosives and the Texas Fire Marshal’s office had agents on the scene on Friday. On Saturday, more than a dozen ATF agents were on scene conducting the investigation.

Kistner said in a press conference Friday that wind, the large square footage of the buildings, the amount of fire when crews arrived, and the fact the buildings were close together were factors in fighting the fire. Temperatures were 105 degrees on Friday and Saturday as hot spots were extinguished.

The search and recovery investigation continues. A press conference is planned for Monday.

Community Impact Newspaper will continue to update this story.
SHARE THIS STORY