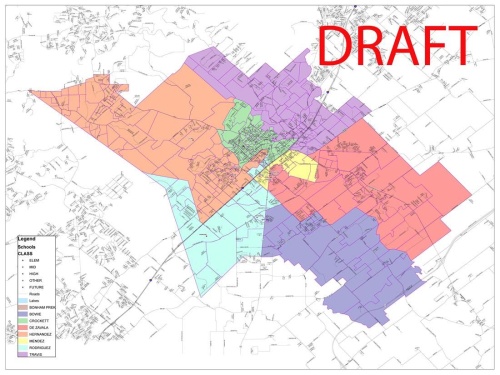 Above is the current draft map for new elementary attendance zones in San Marcos CISD. The district is rezoning to accommodate Rodriguez Elementary School, which will open in August 2019. According to officials, the final rezoning map will be published following the completion of all community input meetings

The construction of the new school, which will be located off of I-35 and Posey Road in the new Trace development, is funded by a bond measure passed by San Marcos residents in 2017.

SMCISD hosted community meetings Oct. 29 and Nov. 1 to get input and take questions from parents about the rezoning process. There will be four more meetings.

Andrew Fernandez, SMCISD executive director of communications and community relations, said at the Nov. 5 SMCISD board of trustees meeting that the final rezoning map will be published after the last of the community meetings.

Fernandez said the final zoning should be designed to anticipate growth and serve the district for more than 5 years. While rezoning, officials will try to follow existing boundaries, such as I-35, to avoid the appearance of gerrymandering. When possible, neighborhoods will be assigned to the same school, he said.

According to the current draft map, Rodriguez Elementary will have 340 students in the first year. Fernandez said the school will start with a lower population than other elementary schools in the district because when the Trace development is completed, there will be a substantial influx of students who will attend Rodriguez Elementary.