First Trace homes to be completed soon in San Marcos 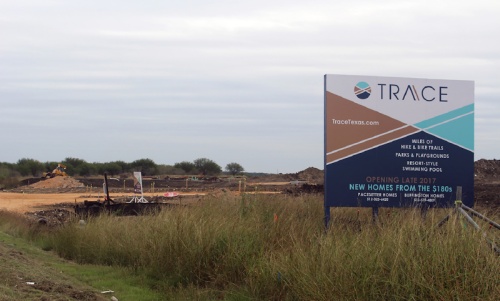 Mixed-use development Trace, located off I-35 on Posey Road, will see its first homes ready this spring.

Ground broke on the community—consisting of 1,000 single-family homes and 850 multi-family homes—in early 2017. Commercial, retail and park space is also slated for the community, as well as San Marcos CISD’s newest elementary school, which is yet to be named. The mixed-use development will be located off I-35 on Posey Road.

Caren Williams-Murch, vice president of High Pointe Communities’ Austin division, said construction on model homes began in January, and the first homes should be move-in ready by March. Construction for the new elementary school will break ground this spring. Design for the school is ongoing, and the San Marcos CISD board of trustees is expected to select a name for the school sometime later this year.

This story is one update from The January Issue. View the full list of top 5 stories to follow in 2018 here.