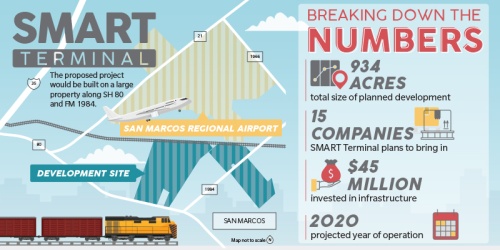 The San Marcos Air Rail and Truck Terminal will be one of the only rail-served industrial parks in Central Texas.

After a bumpy road to the voluntary annexation of several hundred acres of land along SH 80 and FM 1984, a local developer plans to move forward with the San Marcos Air Rail and Truck Terminal, which will be one of the only rail-served industrial parks in Central Texas.

Developer Mike Schroeder said he will invest $45 million in infrastructure for the project and will bring an estimated $3 billion-$4 billion in increased value to the property. In comparison, San  Marcos, as a whole, has approximately $4.5 billion in taxable residential and commercial properties, according to the city.

“I think [the SMART Terminal] is tremendous—I think it’s huge,” said Adriana Cruz, president of the Greater San Marcos Partnership. “There [are] very few rail-served industrial parks. So this will really put our community on the map for some really, really great employers in the manufacturing and distribution side.”


What is the SMART Terminal?

Schroeder said the SMART Terminal will provide a home for approximately 15 companies in industries ranging from distillery to food distribution and possibly electric-car assembly.

What makes the SMART Terminal so appealing for businesses, Schroeder said, is the area’s workforce—with its proximity to Gary Job Corps and Texas State University—combined with the SMART Terminal’s ability to connect companies with railroad and air cargo service, as the industrial park is located next to the San Marcos Regional Airport.

Additionally, Union Pacific and Burlington Northern Santa Fe Railway, two of the nation’s  largest rail companies, have agreed to serve the SMART Terminal.  Schroeder plans to lay 15 miles of track to create his own private rail line, which he has named the San Marcos Railroad. The San Marcos Railroad will connect the terminal’s businesses to the major rail lines.

The SMART Terminal’s first tenant, Katerra, a Silicon Valley-based high-tech manufacturing company that produces building parts to streamline construction, was granted an economic incentive agreement by City Council in October that states the company will bring a minimum of 542-full-time jobs, each paying a minimum wage of $15 per hour, to its soon-to-be 630,000-square-foot facility.

“I think [Katerra is] a perfect fit for San Marcos given our focus on workforce housing, and hopefully this is a partner that can help us meet that goal,” Cruz said.

Schroeder said he has eight to nine prospective tenants interested in the SMART Terminal that could potentially bring the total number of jobs at the rail park to anywhere from 1,200 to 3,500.


Road to annexation and rezoning

For the SMART Terminal to become a reality, it first has to go through a series of bureaucratic processes—namely annexation and rezoning—that have not proved easy.

San Marcos City Council on Jan. 15 voted 6-1, with Joca Marquez casting the sole opposing vote, to approve Schroeder’s request for the voluntary annexation of 934 acres of land slated for the SMART Terminal, though it will not be final until it comes before City Council for a second vote.

One obstacle the developer and officials encountered during the annexation process was the discovery that 200 of the 934 acres were in a disputed area belonging to both San Marcos and Martindale’s extraterritorial jurisdictions, or ETJs. Officials from both cities are discussing a swap that would put the disputed 200 acres officially in San Marcos’ domain, and therefore would be eligible for annexation.

Assistant City Manager Steve Parker said in late January that Martindale officials expect to make a decision in 60-90 days. City Council will likely wait to take its final vote on the annexation until after the ETJ boundary dispute is resolved. If it is not resolved, the council’s final vote will be on the annexation of just 734 of the originally proposed 934 acres.

At its Jan. 15 meeting, City Council also voted 5-2 to zone the land for heavy industrial use, with Marquez and City Council Member Mark Rockeymoore voting against the decision.

Land designated for heavy industrial can have up to 80 percent impervious cover, which alarmed residents who live nearby about increased flooding.

Schroeder said he is only seeking heavy industrial zoning so that he can incorporate rail service into the park.

Other City Council members pointed out that under the city’s land-development code, the project will be subject to checks and balances as new businesses sign on to join the rail park. Each tenant will have to complete a watershed protection plan that will demonstrate exactly how much additional runoff its facility will create and then outline a mitigation plan.

The rezoning vote included an amendment that stated the item would not come back to the council for second reading—which is required to pass the ordinance—until after the members consider a land-development agreement and a possible Chapter 380 agreement, which would give the city power to offer the developer economic incentives if he agrees to follow a set of stipulations the city would determine.

In a Jan. 29 City Council workshop, officials said the city is in negotiations with Schroeder about  a potential Chapter 380 agreement and is also pursuing a land-development agreement, which will likely include a list of prohibited activities that are normally allowed under heavy industrial zoning, such as acid, fertilizer and gas manufacturing.

City Council member Lisa Prewitt said she would like the agreement to include, along with a list of specific prohibited activities, a broader statement with language that prohibits any activity on the property that could negatively impact the San Marcos River.

City staff said Schroeder is participating in the negotiations and is open to many of the city’s land-use restrictions. Parker said Schroeder has also agreed to keep the SMART Terminal at no more than 72 percent total impervious cover.

“I think anyone who would see almost 1,000 acres with up to 80 percent impervious cover would be a little bit worried because of its proximity to where we’ve had a lot of flooding,” Prewitt said at a Dec. 19 City Council meeting. “But I know there’s a lot of checks that will happen along the way.”

Schroeder told Community Impact Newspaper that he is committed to exceed required environmental standards—such as purifying runoff before it flows into the San Marcos River—and that those measures will be written into the final version of the land-development agreement.

He also hopes to partner with the San Marcos Regional Airport to implement runoff-mitigation efforts that would decrease flooding risks in the area.

“We’re going to do our part, but we’re going to ask the airport to do their part,” Schroeder said. “We’re going to take a more comprehensive and regional approach so that when the SMART Terminal is up and finished, the situation will be better.”

As the proposed annexation and zoning decisions for the land slated for the SMART Terminal’s development made their way through both the planning and zoning commission and City Council, dozens of local residents decried the  short notice they had about the meetings and the lack of information they had about the project, which many feared would worsen both traffic and flooding in the area.

Mary Beth Harper, who lives between San Marcos and Martindale adjacent to the proposed SMART Terminal, said at a public hearing that the biggest concern that she and her neighbors have is that the development will worsen traffic on an already congested SH 80.

Parker said the city of San Marcos is working with Hays County and the Texas Department of Transportation to expedite the completion of Loop 110. Additionally, Schroeder says he is working with TxDOT to improve SH 80 by potentially adding turn lanes near the development to increase safety.

“I’ll believe it when I see it,” Harper said. “We’ve been talking about this for a really long time, about this so-called loop going around San Marcos.”

Longtime resident Frank Parrot said at the Jan. 15 council meeting that he is in favor of commerce and growth, but the development’s proximity to the San Marcos River gives him pause.

“[San Marcos] has the most pristine and beautiful river in the whole state springing forth from its core,” Parrot said. “I believe the SMART Terminal is exactly what this city needs. I welcome it with open arms, and I’d like to embrace it like [the San Marcos] Amazon [distribution center]. But this project is in exactly the wrong place for all the wrong reasons. There is no city, state or federal watchdog agency that can ensure that the city and our most treasured jewel will not be polluted.”

“I really share the values that the people expressed about the river and protecting it,” Schroeder said.

As far the initial lack of notice and information for homeowners, Schroeder said that did not happen by design. He did not plan to go public about the project for another six months, at which time he had intended to have a PR firm to spread the word and to conduct outreach. However, that was before Katerra signed on to be a tenant at the rail park.

“What happened was that Katerra came into the picture, and they disrupted my timeline,” Schroeder said.

Katerra agreed to become a tenant of the rail park, but only if its facility could be up and running by the first quarter of 2020, he said.

Schroeder said he plans to be socially and environmentally responsible with the SMART Terminal.

“We love San Marcos and want to be a part of it,” Schroeder said. “And there’s never been a deal at the feet of San Marcos that could do more for San Marcos.”