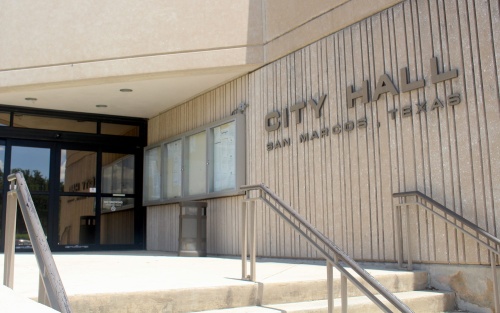 San Marcos City Council voted 6-1 to annex 934 acres of land along SH 80 and FM 1984—a proposal that proved controversial during two recent public hearings and was initially denied, then later reconsidered and approved by the planning and zoning commission.

The land is slated for the SMART Terminal, which developer Mike Schroeder hopes to turn into a rail and manufacturing industrial park. The terminal’s first tenant is Katerra, a Silicon Valley-based manufacturer, to which the city of San Marcos granted an economic incentive package in October.

Dozens of residents watched the vote from the lobby at the Jan. 15 meeting, as every seat in the City Council chambers was full and attendees lined the walls of the room as they waited for their turn to speak about the vote in public comment. Some residents held signs that read “Postpone the vote!” during the meeting and posted other signs containing similar sentiments at the entrance of city hall.

City Council Member Joca Marquez cast the sole vote against annexation, which will require a second vote for final approval.

In addition to annexation, the council took its first vote on an separate ordinance that would zone the 934 acres for heavy industrial use.

The council voted for the rezoning 5-2, with Marquez and City Council Member Mark Rockeymoore voting against it.

The rezoning vote included an amendment which stated the item would not come back to the council for second reading—which is required to pass the ordinance—until after the members consider a land development agreement or a possible Chapter 380 agreement, which would give the city power to offer the developers economic incentives if they agree to follow a set of stipulations the city would determine.

Marquez said she received dozens of calls, emails and messages on social media from residents who live near the proposed development pleading with her to vote against both annexation and heavy industrial zoning for the project because they fear the SMART Terminal will worsen traffic and flooding near their homes. She also heard concerns from people who were worried about the prospect of an industrial project being developed just 1,250 feet from the San Marcos River.

“I’m just an instrument; I am just a voice for the people,” she said. “Ultimately, the people are the ones who voted for me—not the developers, not these companies. Katerra didn’t vote for me. The people voted for me to speak for them.”

While a few residents, like former planning and zoning commissioner John Meeks, spoke in support of the annexation and rezoning of the property because of the economic stimulus it could bring to the area—Schroeder has stated the SMART Terminal will invest $45 million in infrastructure improvements and will bring an estimated $3- $4 billion in increased property-tax values to the city—the majority of commenters urged the council not to move forward.

Mary Beth Harper, who lives between San Marcos and Martindale adjacent to the proposed SMART Terminal, said the biggest concern that she and her neighbors have is that the development will worsen traffic on an already congested SH 80.

Assistant City Manager Steve Parker said the city of San Marcos is working with Hays County and TxDOT to expedite the completion of the construction of Loop 110. Additionally, Schroeder says he is already working with TxDOT to improve SH 80 by potentially adding center and right turn lanes near the development to improve safety.

“I’ll believe it when I see it,” Harper said. “We’ve been talking about this for a really long time about this so-called loop going around San Marcos.”

Resident David Prewitt told City Council that the people who came to the meeting to speak against the development were the same ones who have been devastated by flash flooding in recent years.

“What you do here will affect the world forever,” Prewitt said. “A lot of my neighbors are very afraid of a lot of things here. I remember them describing how they had all their records in their house from the 2014 flood and all of their paperwork and records was destroyed in the 2015 flood. It’s really important that you look them in the eyes…and hear their stories and how afraid they are.”

During the meeting, city engineers showed attendants a 2D model of the property and said that the amount of runoff from the land would be unchanged once it's developed, because the city’s land development code states that developments are not allowed to bring even an additional drop of runoff, which is sometimes achieved by mitigation measures such as detention ponds.

Prewitt pointed out that many attendants were skeptical of the 2D model.

“If you just go around and pass it, it means you didn’t listen,” he said, asking the City Council to consider hosting more public hearings. “That upsets me more than the fears—is that you’ve got people who are afraid, and if your models are right now then [the public] needs to be educated. And if your models are not right, then you need to fix them.”

The City Council agreed to dedicate its Jan. 29 work session and following executive session to discussing both a potential land development agreement and a potential Chapter 380 agreement.

“If we can work out some of the other aspects of this development, which I understand are really real and true to the people who live there, and try to keep moving forward with this, that’s what I would like to see,” said City Council Member Lisa Prewitt.

City Council Member Melissa Derrick said she plans to request that parts of the development be zoned as light industrial instead of heavy industrial.

According to the city attorney, if City Council does not take the final vote on the zoning within 90 days, the process will be delayed and more public hearings will be required before any final action is taken.

Rockeymoore, one of the only council members to vote against the zoning upon first reading, said he is in no rush to push the final rezoning vote through.

“I understand that Katerra’s deadlines are what they are and I understand that the Greater San Marcos Partnership brought them here and all of the things that went into us getting here,” he said. “I’m cognizant of it, but actually, fully addressing the citizens’ perspectives and concerns are more important to me.”
SHARE THIS STORY