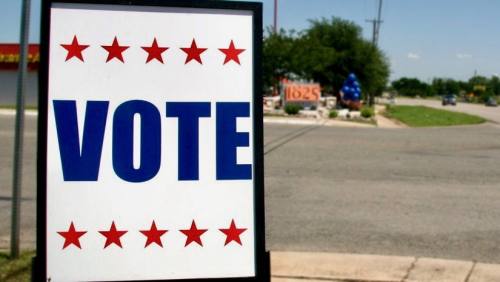 When Hays County voters go to the polls this fall, they will join the electorates of more than 60 other Texas counties in being able to vote at any polling location across the jurisdiction, not only during early voting, but also on Election Day.

According to the Texas Secretary of State’s Office, this November, the program often referred to as countywide polling will be used by 69, or about 27%, of the state’s 254 counties.

Linda Calvert, president of the Hays County League of Women Voters, who testified in a number of public hearings on the subject, said the organization generally supports countywide polling.

“Part of the reason is that it eliminates a lot of confusion and a lot of, essentially, people giving up on voting or being kicked out of the process because of provisional ballots,” Calvert said.

Countywide polling has been around in Texas for over a decade, but in recent years, the state’s most populous counties have adopted it—with Tarrant, Harris, Bexar and Dallas signing on in 2019—meaning that the majority of Texas voters now use the system.

Though it has a great deal of support, citizens, advocates and policy experts have expressed concern that countywide polling can lead to fewer polling locations, and therefore to reduced access.

Countywide polling was introduced through Texas House Bill 758 in 2005, and the first pilot took place in Lubbock County in 2006. In subsequent years, the program was made permanent, and other guidelines were established by the Legislature, according to a report from the Texas Secretary of State’s Office.

One of those guidelines stipulates that each election, only six counties with populations of more than 100,000 and four counties with populations of under 100,000 can be chosen by the secretary of state’s office to pilot countywide polling, which is why Hays County Elections Administrator Jennifer Anderson started the application process in the spring even though the application was not due until August.

“The application is actually a pretty complex process,” she said, noting that a county looking to start countywide polling has to get buy-in from other local jurisdictions and hold public hearings, among other requirements.

Once an application is accepted, a county is allowed to conduct a pilot. The secretary of state’s office can then deem the jurisdiction successful.

“But it’s important for people to know that once the state deems you successful, that’s not forever,” Anderson said. “It’s election-by-election, so any time there’s a problem with the polling or whatever, they can certainly re-evaluate.”

Supporters of countywide polling have said that it will be more convenient, especially for those who do not work near their homes.

“So if somebody’s traveling through on Election Day, and they hit traffic, and they just can’t get to Wimberley or Dripping [Springs] by 7 p.m., I want to make it easy for them to vote,” Anderson said. “So if the first place they hit is a location in Buda on their commute, then I want them to be able to stop and vote there.”

Countywide polling may also help to eliminate confusion for people who do not know their precinct or where they have to vote on Election Day.

That kind of confusion has come up recently in Hays County. In November 2018, there were reports, cited in one commissioner candidate’s challenge to the election results, that Texas State University students were at times being directed to the wrong polling location.

County Judge Ruben Becerra said he was aware of the complaints.

“We heard numerous, countless reports of people being told to go to different locations, and when they’re showing up at 6:30 at night, when they just got out of work, that’s not really an option,” Becerra said. “They lost their chance to vote, and so I’m grateful that that [this] will hopefully end that kind of thing.”

Anderson also said that countywide polling will provide a more consistent set of polling locations in advance of the 2020 election.

“From my perspective, our job is to increase voter participation,” Anderson said. “We’re always looking at ways that we think will make voting more palatable and more convenient for the voter.”

The main point of opposition raised in public meetings about countywide polling was that state legislation allows counties to have fewer polling places than are required under precinct-based voting. In the first year, counties can have as few as 65% of the previous number of polling locations, and in subsequent years, that number falls to 50%.

Ali Lozano, the Houston-based voting rights outreach coordinator for the Texas Civil Rights Project, said concerns about losing polling locations were also raised in Harris County, which piloted countywide polling in May. Lozano emphasized the fact that counties can reduce polling locations, but they do not have to.

“There is nothing in the law that says that counties are required to close polling locations if they switch to countywide polling,” Lozano said. “The most important part is that residents of these counties really need to keep tabs on the transition into countywide polling and hold their elected officials accountable.”

“The threats that mass closure of polling locations has on voters across the state cannot be understated,” Stevens told the court.

Anderson said that no changes will be made before the 2020 elections and that there are no specific plans to close vote centers, but it is a way counties can save money.

“If we went through 2020 and we had an election precinct or polling place that just didn’t have any activity, or very minimal activity, we might look at moving to an area we thought would increase voter participation,” Anderson said. “But other than that, we don’t plan to cut.”

Though Hays County League of Women Voters supported moving to countywide polling, Calvert said the organization is concerned about having fewer polling locations, especially in terms of drawing in new voters.

“One of the concerns that we have had is that, often, the way that people in charge think about voting is, ‘Where is the concentration of people who have voted?’” Calvert said. “And there are areas that have not voted heavily in past elections, and we don’t want that to be an area then that is ignored.”

The other issue with geography is that while in precinct voting, all voters will have a polling location fairly near them. But in countywide polling, the rules for where to put the vote centers are much more relaxed. Anderson said that the formula is  that out of the four commissioners’ precincts, no precinct can have fewer than half the number of polling locations as another.

But some commissioners’ precincts are geographically large, and in theory, those vote centers can be clustered.

In practice, this issue emerged in Hays County when an initial list of vote centers was issued by the county for approval by commissioners in August. The list included, for example, six vote centers in Wimberley and six in Kyle, despite Kyle being a much larger town. There were also only a few locations on the east side of I-35, and the Texas State University location had been named only as “TBD.”

After community members expressed concern, commissioners called a last-minute public workshop. After the standing-room-only session, a revised list was approved, but both members of the public and elected officials said that there had not been enough time for feedback.

In response to the vote center discussion, commissioners agreed to create a citizens election commission that will meet at least twice a year to review polling places.

Though the members have not yet been appointed, the board will have representatives from local cities, school districts, major political parties, Texas State, the League of Women Voters, the disabled community and the rural community as well as 10 general representatives—two for each of the four commissioners and for the county judge.

The county also invested in new hybrid voting machines that create a paper record in addition to recording an electronic vote, which community members had asked for, especially after an incident in 2017 in which votes were lost.

“People can verify their votes before they’re tabulated; the votes can be stored for recount; and then, post-election auditing will be a lot easier with paper ballots,” Anderson said.

Becerra said the new system, the new machines and the new commission make him optimistic about the future of elections in Hays County.

“We have, historically, for years, not done things in reference to elections that provide a lot of comfort for the county residents,” he said. “I believe that we are on our way to the most supported and transparent voting system that we’ve ever had.”

Anderson said there was no big plan to overhaul elections, but she has noticed an uptick in citizen engagement, and her office welcomes it.

Calvert has also seen an uptick in community involvement in elections, with membership in her organization spiking in recent years. She said that public involvement, such as that from the citizens committee, will be critical in monitoring the pilot run of the countywide polling system.

“I think things fall through the cracks when people aren’t paying attention,” Calvert said. “I think we just have to.”