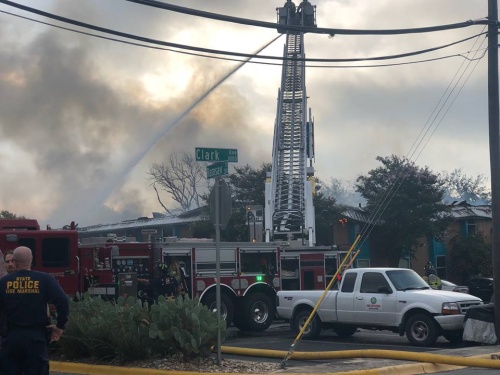 Officials believe the deadly July 20 fire at Iconic Village and Vintage Pad Apartments was caused by one or more people and are offering a reward for information that leads to an arrest.

Fred Milanowski, special agent in charge of the Houston Field Division for the Bureau of Alcohol, Tobacco, Firearms and Explosives, said at a Nov. 30 press conference that ATF has classified the Iconic Village Fire as incendiary, meaning it was intentionally set and the incident will now be considered part of a criminal investigation. ATF is offering a $10,000 reward to anyone who comes forward with information that leads to an arrest.

Milanowski said no arrests have been made yet and ATF will work hand-in-hand with local authorities as the investigation continues.

"We met with the families earlier--that was a tough meeting, but they're strong," Milanowski said. "We need the public's help."

Milanowski said the ATF deployed its National Response Team, which has processed more than 800 fire and explosive scenes, to investigate the fire. He said the ATF has no reason to believe that the person or people who set the fire have done so before.

San Marcos Fire Marshal Kelly Kistner said it is important that people know multiple ways out of their apartment in the case of fire and to be educated on fire safety.

Kistner said that according to video footage, smoke detectors did go off during the fire, but the investigation might shed light on when the alarms first started going off.

Anyone with information about the fire is asked to call 1-888-ATF-TIPS.

This report has been updated to include additional comments from officials.