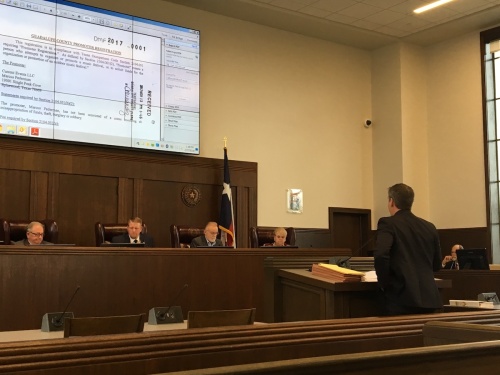 Concerns over traffic, safety and trash were enough to make three out of five Guadalupe County commissioners Tuesday vote against a permit that would allow 30,000 people a day to attend a three-day music festival at Cool River Ranch.

County Judge Kyle Kutscher, Precinct 4 Commissioner Judy Cope and Precinct 2 Commissioner Jack Shanafelt voted to deny the permit after 4 1/2 hours of testimony from citizens who live near the site of Float Fest and from public safety officials and private security representatives who reviewed the permit application.

Now in its fifth year, Float Fest—to be held July 20-22—allows attendees to float down the San Marcos River and camp on the 221-acre Cool River Ranch property at 601 Dupuy Ranch Road, Martindale, where live musical performances are held Saturday and Sunday. The property is only accessible from Scull Road, a two-lane road. Last year, commissioners granted Float Fest a music festival permit for 15,000 attendees.

In past years, Float Fest has offered musical performances by artists and bands, such as Portugal the Man, Grouplove, Rooney, MGMT, Chromeo, Rick Ross, Zedd and Weezer. This year's lineup and schedule has not yet been announced.

Tuesday's permit hearing was mandated by the Texas Occupations Code, which says commissioners must grant the permit unless they find the application failed to protect the safety and health of festivalgoers or the times and location of the festival create a "substantial danger of congestion and disruption of other lawful activities in the immediate vicinity of the festival."

Float Fest owner Marcus Federman was required to apply for a music festival permit with Guadalupe County because the festival has more than 5,000 attendees, is outside the boundaries of a municipality and is not within a permanent structure. Federman filed the permit in November.

This year, he proposed bringing 30,000 attendees per day to Cool River Ranch, doubling the number of people who attended last year.

Federman spent the first 30 minutes in a back-and-forth Q&A session with his lawyer, Joseph Stallone, outlining the permit application and ensuring commissioners he had followed procedures and improved the plans for Float Fest.

He then asked public safety officials and private security representatives to speak on this year’s Float Fest approach, highlighting the increase in patrol and safety as well as a more fleshed-out traffic plan.

The traffic plan was certified by a traffic engineer, and Float Fest will engage the services of Texas Parking Services—which has worked for Austin City Limits Music Festival and Austin Trail of Lights in the past—inside Cool River Ranch.

As part of the traffic plan, all entrances will be lighted, trailer message boards directing traffic will be at every entrance, and more security will be stationed 24 hours a day around the entrance and exit gates. More parking and camping space has been added and buses shuttling attendees to float the river will be routed to Hwy. 80 instead of FM 621.

“I honestly feel that it’s a good plan,” said Hays County Constable Gary Griffin, who said he reviewed the application extensively. “It will certainly be better than it was.”

According to Griffin, 120 officers will staff the event, performing traffic control, parking control, grounds control, perimeter checkpoints monitoring and other duties. He said a K-9 officer will also be stationed at the entrance.

A central command trailer for first responders and festival staff was also proposed, and Federman outlined an emergency management plan, bomb threat response and active-shooter plan in his proposal.

Stallone said this year, Federman collaborated with public safety officials to ensure the traffic and safety plan was adequate. He called Float Fest a "win-win" for the community, pointing to the sales tax revenue that would be received throughout the weekend when as many as 30,000 attendees inevitably spend money in and around Guadalupe County.

"I hope the commissioners would agree and acknowledge that it’s been a different permitting process this year," Stallone said. "What we put in here will be followed to a T, and if it’s not, it’ll be with everybody’s knowledge and acceptance."

He said he was worried about emergency vehicle access to the site in the event of a grassfire given the large number of vehicles parked in grass fields during the event.

"The threat to human life is very high with that kind of situation," he said.

Last year, residents complained of loud noise from the live music and helicopter rides being offered to festivalgoers. Federman said helicopter rides would not be offered this year, but a helicopter landing area would be available for emergency air evacuation.

Speakers on Tuesday also complained about traffic coming in and out of Scull Road as well as the amount of trash left in the river and around the banks during the festival.

Technically, no entity has jurisdiction over the San Marcos River, so commissioners cannot regulate what happens while festival attendees float the river. Float Fest has contracted with tubing companies to provide tubes and coolers, according to Federman's application. Alcohol consumption is permitted on the river and festival grounds.

Last year, Federman spent $1,465 on mesh bags for people floating to use as trash bags, according to the application. He also hired crews to clean the river during and after Float Fest and spent about $10,000 over the last three years on a Keep the River Clean initiative.

Federman said he would also provide neighbor passes to residents along Cottonseed Run and San Marcos River Ranch allowing them to bypass festival traffic. He said letters will also be sent out to residents at least 10 days prior to the festival's start.

Stallone said he took issue with the concerns raised by people speaking against the permit.

“A concern is speculative, not based on evidence, oftentimes contradictory to this county’s own written report on whether there are adequate preparations to protect the health and safety of the individuals and the community in general. Concerns are not evidence that our preparations are insignificant to address any problems,” he said. "We have gotten it right. Perfect? Maybe not perfect, but there's nothing in this statute that requires perfection."

Federman has the right to appeal the court's decision, which his lawyer indicated could happen. Federman would have to file a petition in a district court of Guadalupe County, according to the state code.