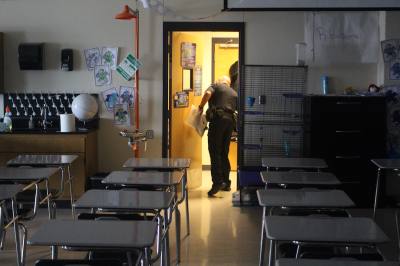 With the Feb. 14 shooting at a high school in Parkland, Florida fresh on their minds, hundreds of San Marcos High School students huddled together in dark areas of their classrooms Thursday to practice what to do in an active shooter scenario.

At the cue of a PA announcement to lock the doors, turn out the lights and hide out of sight, students were given three minutes to get into position and become as quiet as possible.

In a real active shooter situation, “we’re going to where the sounds of violence are,” Klett said.

It’s the first of its kind that runs lockdown drills countywide, regardless of school district, according to Kharley Bagley Smith, director of Hays County Emergency Services.

“It really doesn’t matter what the patch is,” Smith said as more than 50 emergency responders gathered in the high school library before the drill began. “[The training is] the muscle memory of practice, and that is what we’re trying to get to.”

During the drill, officers checked to make sure the classroom door is locked and students are hidden in a place that cannot be seen through the door’s window. After the initial check, officers sweep back through the classrooms, identify themselves as police officers, unlock the doors and give the all-clear.

Superintendent Michael Cardona watched the drill unfold and said he was grateful for the program.

“You always reflect after a tragedy happens how this affects your district,” he said. “I take school safety extremely seriously. Events like [the Parkland, Florida shooting] keep it at the forefront of teachers’ minds.”


During the pre-drill briefing, Klett warned officers they might be talking to teachers and students a little longer than usual after the all-clear is given.

“People are a little bit sensitive right now, so there might be more questions,” he said. “A lot of the kids are nervous, and seeing your calm presence will really help.”

Klett and Smith said they are constantly evaluating the program’s efficiencies, but so far, it has been successful and been received well within all the school districts of Hays County.
SHARE THIS STORY