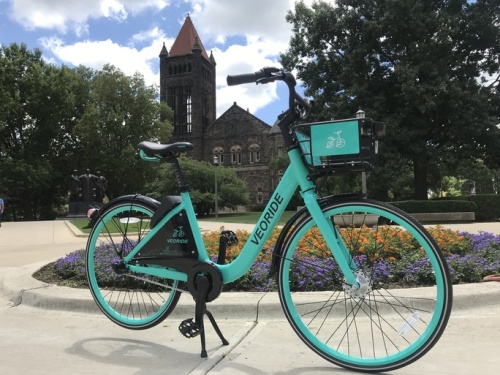 Riders can locate, rent and unlock bikes throughout the city with the VeoRide app.

In partnership with Texas State University and the city of San Marcos, VeoRide is launching a bike-share program to increase mobility options in the community.

VeoRide, an Indiana-based company, will provide 350 bikes by the end September at no cost to its partners. The dockless bike system allows riders to locate a nearby bike via a smartphone app, travel anywhere in the city and return the bike at any location.

"We removed the investment barrier to our campus and community partners because we want this alternative transportation to be accessible and adopted by the communities we serve," VeoRide's Communications Director Linda Jackson said. "We have staff in the areas we serve who will collect bikes in improper areas and put them back into circulation; it's what we call rebalancing. We encourage riders to practice good bike etiquette and use the bikes as [they] would their own. Park where it’s appropriate to do so, and if you see a bike on its side, go ahead and stand it up."

In 2017, the city of San Marcos discussed the possibility of bringing car-sharing and bike-sharing services to the area. In 2018, the city partnered with Texas State to issue a joint request for proposals to attract a bike sharing company to operate in the area.

"The city of San Marcos and Texas State University have taken a collaborative approach to addressing mobility challenges in our community," said Kevin Burke, the San Marcos economic development and downtown administrator. "Shared mobility platforms, including dockless bike-share, car-share and even scooters, are changing the way people move around cities. Downtown San Marcos and Texas State University are the center of a dense and vibrant urban environment, and we want to ensure that we make accommodation for trips of all kinds, whether they are on foot, by bike or scooter, on public transit or by private motor vehicle."

Six private firms responded to the joint proposal, and were scored by a committee consisting of Texas State and city staff, Burke said. Based on presentations, the committee chose VeoRide.

Pay-as-you-go bike rental rates start at 50 cents for 15 minutes, and day passes are $6.99. Rate packages are available for $25.99 a month or $99.99 annually and include unlimited one-hour rides. Texas State students are eligible for discounts on monthly and annual memberships.

“We are honored to win a five-year contract to bring VeoRide to Texas State University and San Marcos,” CEO and co-founder of VeoRide Candice Xie said in a written statement. “Texas has been such a welcoming state, and we can’t wait to establish roots here and other Texas communities in the near future.”

VeoRide was founded in 2017 at the Purdue Foundry of Indiana, and currently operates bike-share programs nationwide in Arkansas, Illinois, Indiana, Iowa, Kansas, Massachusetts, New Hampshire and Texas. The program has launched in other nearby markets such as Austin, the University of North Texas and the University of Texas at Tyler.
SHARE THIS STORY