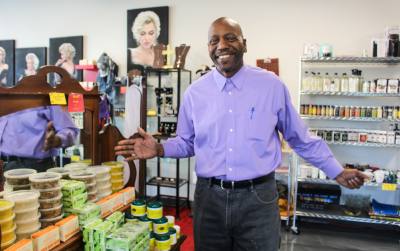 When a customer walks into Wright’s Emporium, he or she will mostly likely be given a lesson in the history of coffee, the benefits of shea butter or on how to live a healthy life.

The lesson will come from owner Ammie “Slim” Wright, a born-and-raised Austinite who said he wanted to help people understand what they were putting in and on their bodies by opening a shop that sold natural, good-for-you products, such as African black soap, shea butter and body oil.

Wright opened his shop, Wright’s Emporium, on Kyle’s Main Street in January 2017 hoping to “sell people what’s going to benefit them,” he said.

Wright grew up in East Austin. His family owned clubs on East 11th Street, and when he was 18 years old he said his mother helped him get a loan to start his own booking agency. From then on Wright said he always worked for himself. After spending several years in Atlanta, he said he came back to Austin in 2015 to take care of his mother. After making a connection with the builder of the Howry Building in Kyle, he secured a space to sell his goods.

“I was looking for a place to grow that I could grow with,” he said, adding he plans on adding a second location in another small town near Kyle by the end of 2018.

“I have nothing but love and respect for [Wright], and he does a lot for our community and he helps people who need it,” he said.

For customers like Dube, Wright offers the Kyle Coffee Club. Customers can buy a $40, 24-cup punch card, which averages to about $1.80 per large cup rather than the usual $2.71. A $60, 24-cup punch card allows customers to buy other things, such as cold brew and soft drinks.

For now Wright said he is focused on giving the customers quality coffee and products.

“Every customer that comes through this door, they always come back,” he said.