The Heritage Trail West project includes a pedestrian overlook at Memorial Park. A spiral ramp will lead to the top of a bluff with views of Brushy Creek. (Rendering courtesy city of Round Rock)

A long-awaited trail could break ground in Round Rock this summer. On June 25, Round Rock City Council approved a nearly $7.3 million construction contract for Heritage Trail West. 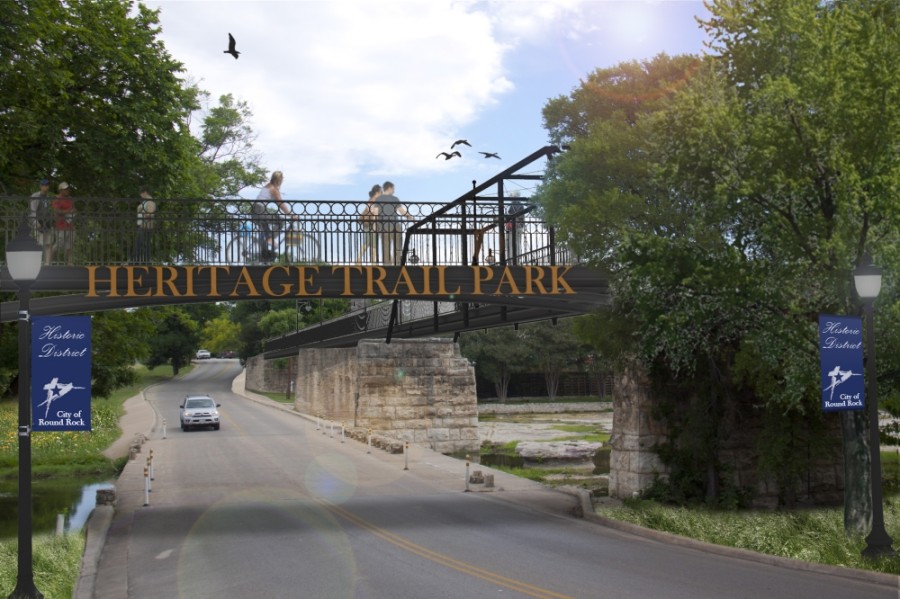 “We’ve been talking about this for awhile,” Council Member Rene Flores said. “It’s good to be reminded of what it can be, of what it is going to be.”

The trail will span approximately 1 mile and will pass under I-35. The contract includes installation of benches, landscaping, irrigation and fencing.

“It’s easier to build a road than a trail, especially through downtown Round Rock,” Round Rock Mayor Craig Morgan said. “But it will add so much to this community. It’ll be exciting to tell our history.”
RELATED STORIES

• City of Round Rock, Round Rock Chamber partner for 'Round Here, We Rock a Mask' campaign

Plans for Heritage Trail West include timeline-style signage and monuments denoting important events and historically significant landmarks. While markers and monuments will be installed, the $7.3 million will not cover everything that was initially envisioned, Parks & Recreation Director Rick Atkins during a June 23 meeting.

“We hope to tell that story in a greater capacity,” Atkins said. “But we’re probably going to have to go [secure additional funding] to be able to truly tell the story.”

Heritage Trail West is one segment of the approximately 17-mile Brushy Creek Regional Trail, that when complete, will stretch from Cedar Park through Round Rock.

Funding for Heritage Trail West was included in a $56.5 million bond voters approved in 2013.

“This project was bid in 2013,” Atkins said. “The money that we had to do the significant portions in this trail has dwindled a little bit.”