"To be honest, [downtown revitalization conversations] haven't changed very much," Lesniak said in a call with Community Impact Newspaper. "We're having the exact same conversation today about these code changes that we started having after the original downtown overlay."

In 2005, the city established the now-former downtown overlay, at the time referred to as the central business district. Today, Pflugerville's downtown district overlay encompasses much of the former business district, which Lesniak said incorporates a significant portion of single-family residential dwellings.

Amendments under consideration would not rezone properties in the downtown district.
RELATED STORIES

• 30-home Round Rock community to begin move-ins this fall

• Townhouse sales jump nearly 160% in Round Rock, Pflugerville and Hutto

The code amendments would apply to Pflugerville’s downtown district overlay, a geographic area ranging from FM 685 to West Pecan Street that is divided into several neighborhoods and subdistricts, which aim to define strategic areas for development. 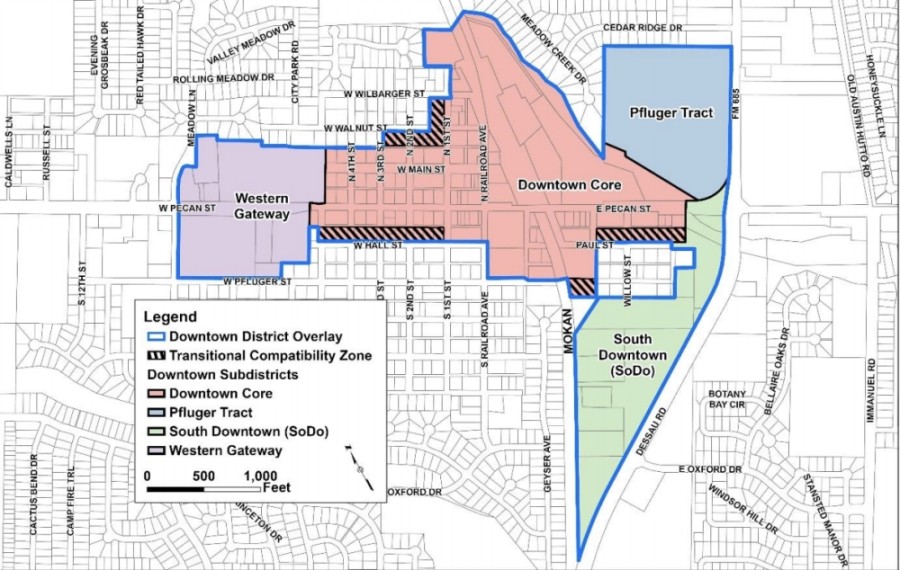 Code changes are required to go before the Pflugerville Planning and Zoning Commission and Pflugerville City Council. A timeline for these next steps has not yet been announced.

As part of the proposed amendments, the city is considering a transitional compatibility zone that would enforce which architectural standards are permitted within the denoted area. However, some residents said their concerns were less with the architectural aesthetic of a building and more with its residential or nonresidential designation.

"Use is much more of a compatibility issue for residents than architectural style," resident Becky Halpin said.

Halpin pointed to the common practice of older homes being repurposed as restaurants and entertainment spaces in neighboring Austin. With the potential for commercial spaces could come the possibility of increased noise, street parking and trash, she added.

Council Member Doug Weiss said there is no legal way for the city to prevent zoning, adding it can instead put these architectural requirements in place and allow prospective developers to go through the rezoning process at the discretion of future councils and planning and zoning commissions.

Cynthia Lovin said she has lived in Pflugerville for more than 30 years and suggested council pursue a plan that supports a vibrant and harmonious mix of residential and commercial properties. She added that the city now has both the responsibility and the opportunity to lay a cohesive groundwork with the downtown overlay, if paired with a few tweaks in greenspace availability, walkability and parking.

“We have loved the peaceful, laid-back vibe of downtown," she said.

Lesniak added that within the past five or six years, the former council directed staff to move boundaries and meet with downtown residents and businesses to discuss prospective changes. Lesniak requested council now create a document that solidifies specific residential areas as well as change the phrasing from transitional compatibility zone to residential compatibility zone.

Several residents, including himself, Lesniak said, have been at odds with the city on this issue for 15 years. His hope is that both parties can meet together and end fights on additional zoning request cases down the road.

“We’re just asking you to protect our neighborhoods," he said.

In closing, Marsh said he wants the plan not to be a deterrent to the historic legacy of downtown or its residents but rather a marrying of the past of Pflugerville with its coming future. Development, he said, is inevitable; the past decade alone has proven that.

However, Marsh said the goal is to put a framework in place that provides protection for residents and adherence by prospective developers to maintain the architectural and cultural integrity that is downtown.