Round Rock ISD board of trustees names new president, vice president and secretary 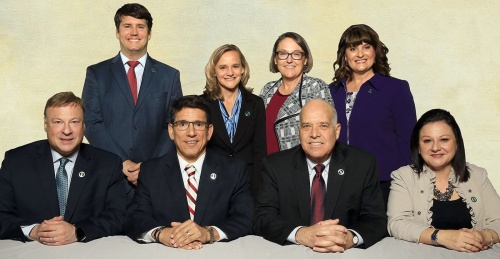 The Round Rock ISD board of trustees elected its new officers Dec. 20.

After swearing in three newly elected trustees, the Round Rock ISD board of trustees nominated new board officers at its final meeting of 2018.

On Dec. 20 the board conducted a ceremony to swear in trustees Amber Feller, Place 3; Cory Vessa, Place 4; and Amy Weir, Place 5. Steven Math was also re-elected to retain his Place 6 seat.

Following the ceremony the board elected a new president to replace Diane Cox, who decided not to run for re-election when her term expired in 2018. Place 2 trustee Charles Chadwell, the sole nominee for the position, was elected as the board's new president. Chadwell has served on the board since 2008. His term expires in 2020.

Place 1 trustee Nikki Gonzales was named vice president. Gonzales has served on the board since 2016, and her term expires in 2020.

Math was named board secretary. Math was appointed to the vacant Place 6 seat in November 2017. His term expires in 2022.