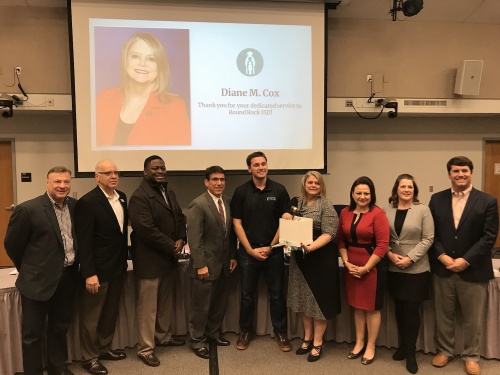 The Round Rock ISD board of trustees and Superintendent Steve Flores stand with a district student following a Nov. 15 presentation recognizing the outgoing board members.

Outgoing Round Rock ISD trustees Edward Hanna, Suzi David and board President Diane Cox were recognized at the board’s Nov. 15 meeting, the last meeting for the three members.

Hanna was appointed to the board in February 2017 and has since served on campus Watch D.O.G.S., two citizen bond committees and as a participant of the PTA, according to the district.

Hanna thanked his wife for her support during his tenure on the board and encouraged the board to continue working on equity in the district.

"I want to thank everyone for their support," Hanna said. "I will not be going far. I will still be living here, I will still be involved with mentoring. ... If there is any way that I can help just let me know."

David was elected to the board in 2014 and has served as the board’s secretary since 2017. The same year she was selected to participate among a group of board members in the Leadership TASB, a study program, according to the district.

"During my tenure I was honored to be able to contribute my time to the students of Round Rock ISD," David said. "As a trustee I ensured that the school board was accountable, fiscally responsible with taxpayer money and all funds are used for the benefit of the students first. This was proven year after year with the AAA bond rating from Moody and Fitch that we all should be very proud of. ... My hope for this district is the community will come together, work together, lead together and not divide the district. This is not what is best for the future of our children. Again, thank you for the opportunity I had as a Round Rock ISD school board trustee."

Cox, who was first elected to the board in 2005, announced that she would not seek re-election after she was elected to her current term in 2014. She has served as the board’s president for five years among other leadership positions, according to the district.

“This is a phenomenal district, and I hope that people continue to challenge and continue to do what is best for all kids as they move forward,” Cox said at the meeting. “Sometimes it’s difficult when you sit here and try to look at the whole district, and it is easy for you to get focused on one campus or one learning community, but I will tell you that this is a job that’s so much bigger than that—it’s all 50,000 kids.”

Trustees Mason Moses, Nikki Gonzales, Steve Math and Charles Chadwell as well as Superintendent Steve Flores each expressed their thanks to Hanna, David and Cox for their time served on the board.

Vessa, Weir, Feller and incumbent Steve Math will be sworn in at a board meeting once results are canvassed.