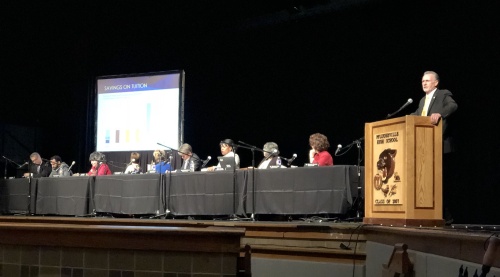 Dr. Richard Rhodes, president of Austin Community College, speaks alongside members of the ACC board of trustees during a public hearing at Pflugerville High School on Monday, July 9.

An effort to bring a large portion of Pflugerville ISD into the Austin Community College district is one step away from going to voters, but some residents have questions remaining about the details of the ACC’s plan.

The ACC board of trustees heard from 20 members of the public Monday at a hearing held at Pflugerville High School’s Performing Arts Center that gave the community a chance to voice their opinion about the potential decision. Next, the board is set to vote on Aug. 13 as to whether to call a ballot measure in November.

Currently, only the portions of PISD located within the city of Austin are inside the ACC district. In June, members of a political action group called Pflugerville Pfriends For ACC presented a petition to the board with 3,556 signatures calling for annexation into the taxing district. ACC verified 2,710 of those signatures–a number equating to the five percent of registered voters necessary to make the petition valid.

If the rest of PfISD is added to the ACC district, it would increase property taxes for homes in the area while allowing students from that portion of the district to attend ACC for a reduced fee.

According to ACC’s service plan—a basic layout of what joining the district entails—the existing tax rate property owners pay to ACC is 10.8 cents per $100 assessed valuation. That means a property owner with a home worth $200,000—the average PfISD home value according to the service plan—would pay about $17 more in monthly taxes.

Tammy Smith, chairwoman of the Pflugerville Pfriends for ACC Political Action Committee, said the group formed in April 2017. They started the process by having discussions with ACC, then reviewed a draft of the community college district’s service plan before beginning to knock on doors in town this spring.

Many of the speakers Monday night supported the idea of bringing PfISD into the district.

“I funded my kid; I want to help your kids go to school,” Pflugerville resident Kim Ringer said. “I’m willing to give up a dinner a month to pay this tax. We have so many taxes that don’t mean much to me, but this one does.”

However, there were also some reservations among members of the public Monday night. Justin LeBlanc, a Pflugerville resident and ACC graduate, said an effort to bring PfISD into the ACC district about five years ago broke down over discussions of a local campus and also said he’s “apprehensive” about how much ACC is willing to put into the Pflugerville community under the existing service plan.

“All I’m asking is you put the investment in Pflugerville we’re willing to make in you if you decide to annex,” LeBlanc said.

According to the service plan, ACC would include within PfISD a “Workforce Innovation Campus/Center to meet workforce needs in health care, IT and/or advanced manufacturing and transfer education courses.”

According to ACC spokesperson Jessica Vess, the details of that workforce center would be discussed among representatives of the community college district and members of the community to create a facility that would best serve the needs of Pflugerville ISD–should the ballot measure pass.

“What we do when we create those: We look at what are the needs for business and industry in that community,” ACC President Richard Rhodes said. “What programmatic areas need to be delivered in that community specifically?”

Rhodes said ACC’s Elgin campus, which opened in 2013 and expanded in 2018, features veterinary technology and sustainable agriculture programs because those were the two areas residents said were a need in the community.
SHARE THIS STORY