Data: Use of economic incentive deals climbed over last decade 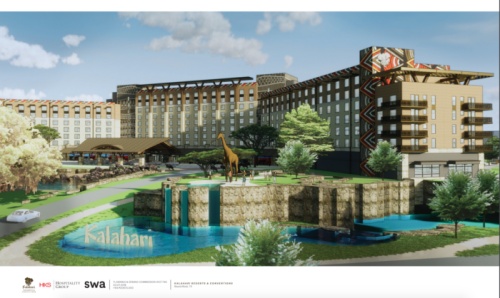 A rendering of potential design plans for Kalahari Resorts & Convention Center featuring a giraffe statue and a waterfall feature.

The use of economic development incentives by local cities and community development corporations has sharply increased in the past decade, according to data acquired by Community Impact Newspaper.

From 2000 to 2008, the city of Round Rock entered into development deals with five separate companies. City data shows in the time since, Round Rock has signed onto 32 separate such agreements.

Similar trends are seen in the cities of Pflugerville and Hutto as well as each city’s respective economic development corporations.

Local officials say the increase comes as the region experiences tremendous growth, with more companies than ever before looking to set up shop in the region. Economic incentive tools, some officials say, are the extra push needed to secure interested companies.

However, critics of incentives say these companies, or at least the industries, are relocating regardless of economic development tools and as a result, cities are leaving millions of dollars in property and sales taxes on the bargaining table.

“I think the key point is that most of the academic research has found that the majority of incentives are going to firms that were going to come even without incentives,” said Nathan Jensen, a professor in the Department of Government at the University of Texas at Austin.

Economic development corporations, or EDCs, are tax exempt, separate entities from municipalities that collect half-cent sales tax proceeds from cities. By law, EDCs may only recruit specific types of employers and are restricted to fund only certain types of projects depending on their designation.

Municipalities can offer Chapter 380 agreements, which grant loans or city funds for retail or commercial projects, and also tax rebates or performance agreements, in which companies must hit certain benchmarks in order to receive funds or tax rebates.

Records show Hutto and Pflugerville have recently utilized the tax increment reinvestment zone, or TIRZ, a tool that redirects ad valorem taxes collected on an established area to be spent on improvements within that zone.

“In order for cities to grow productively in a way where they have a balanced economy, particularly with cities with high-growth issues, they have to have the capability … to use all of the economic development tools,” Hutto City Manager Odis Jones said.


INCENTIVES IN ROUND ROCK

City documents show the city of Round Rock offered its first economic development deal in 1993. That deal, signed with Dell, has been unquestionably successful.

Round Rock signed a 60-year 380 agreement with Dell to guarantee property tax rebates and allocate sales tax-sharing, according to city documents. In the 26 years since the incentive was signed, the city of Round Rock has rebated $158.15 million in tax funds to the technology giant. Between collected sales and property taxes, the city of Round Rock has earned $326.18 million—more than double what has been rebated to Dell.

Then in 2005, the city used economic agreements to secure two of its largest sales tax generators—IKEA and the Round Rock Premium Outlets. City documents show that Round Rock has rebated more than $8 million combined to the two retailers.

The Round Rock Premium Outlets alone has sent $29.94 million in sales taxes back to the city. IKEA’s sales tax collections are confidential, per city documents.

All of that is excluding Kalahari Resorts, which is poised to become one of Round Rock’s top tax revenue generators, per Morgan.

In December 2016, Round Rock City Council approved several development agreements between Kalahari and the city which require Kalahari to invest at least $350 million into the project, construct at least 975 rooms and employ at least 700 workers. That will make it one of the city’s top employers, according to figures from Round Rock’s annual budget.

The agreements dictate that the city of Round Rock and the Round Rock Transportation and Economic Development Corporation spend a combined $64.5 million on constructing a convention center and public improvements on the Kalahari site.

Since the 2006 calendar year, the city of Pflugerville has entered into 26 separate 380 agreements, with the most recent beginning in December 2017. There are active agreements ongoing with seven separate companies.

Community Impact Newspaper receives a 50 percent property tax rebate from the city of Pflugerville and incentives from the Pflugerville Community Development Corp., or PCDC.

Sales tax rebate information for several companies, including Costco, Living Spaces, Marriott, Lauren Concrete, Cornerstone, Cinemark and Hawaiian Falls is not made available for public disclosure, so the total rebate number is likely much higher.

Amy Madison, executive director of the PCDC, is responsible for recruiting companies to expand in or relocate to Pflugerville. Since 2012, the PCDC has struck deals with more than 30 companies.

“Primarily what we do is we use our dollars to significantly invest in infrastructure,” Madison told Community Impact Newspaper.

In the past seven years, PCDC has paid out $2.14 million in economic incentive agreements and may pay out an additional $2.83 million through ongoing agreements, according to figures provided by PCDC.

More than half of the remaining payout funds are eligible to go to Costco. In a deal struck among Costco, the city of Pflugerville, the PCDC and Travis County Emergency Services District 2, Costco is eligible for $6.25 million in sales tax rebates over the next 15 years. In return, Costco agreed to make a $15 million capital investment in its property.

“Businesses like Costco … it is not uncommon for them to request and to receive incentives because they’re a big fish for sales tax,” Pflugerville Assistant City Manager Trey Fletcher said. “If other entities are willing to do incentives, we are, too.”

The use of economic incentives in Hutto has exploded in the past four years. According to figures from the city of Hutto, 12 of the last 14 economic incentive agreements the city has signed with a company have been signed since 2015.

Jones said the development agreements are necessary to leverage funding for infrastructure vital to the rapidly growing city. Figures from the U.S. Census Bureau show the city grew by 42.57 percent from 2012-17, up to 22,644 residents.

“We want to have a well-balanced economy, and you can’t have that if all of the burden is on your residential property owners,” Jones said.

Hutto has used its economic incentives in recent years to build developments that will themselves recruit industrial and retail companies, such as Innovation Business Park or the Co-Op District. As of January, four companies have officially announced they will open in those locations, according to city documents.

City officials additionally leveraged an economic development agreement to secure a new Hutto City Hall in the Co-Op District site at no cost to the city, an $8 million savings, according to Jones.

The city of Hutto has a combined $11 million invested for infrastructure improvements between the two project sites. Additionally, city documents show MA Partners—developers of the Co-Op District—is set to receive tax breaks for the next 20 years from the Hutto EDC and the next 30 years from Williamson County.

As cities across the Central Texas region sign an increasing number of economic incentive agreements to lure companies to their communities, a growing number of critics are voicing their opposition to doling out such incentives.

Locally, criticisms of incentives packages are growing, as well. The city of Pflugerville in 2010 created a TIRZ for the Falcon Pointe subdivision, but the TIRZ’s boundaries were extended in December 2018 to include the mixed-use development Pecan District.

During a public hearing for the TIRZ boundary amendment, several Pflugerville residents provided robust opposition to the incentives package.

“I understand the [Pflugerville City] Council’s interest in expanding the business opportunities in Pflugerville, but not to this extent,” said Nick Chrissie, a Falcon Pointe resident. “It does not make fiscal sense, nor can I see how you can justify this to the taxpayers.”

In a recent research paper published by the W.E. Upjohn Institute, an independent research organization, researchers reviewed 30 studies of incentives effects. The research found that between 2 percent to 25 percent of incentivized companies were lured because of the incentives packages they were given.

“There is very little evidence that these programs work,” Jensen said.

Local officials argue that the incentives offered to companies in recent years have taken the negotiations the extra mile. Morgan said the city of Round Rock is competing alongside regional partners to recruit companies from across the state or even globally.

“It’s a competitive market. I understand the sentiment, but that’s the way the world works,” Morgan said. “You have to compete with those deals.”

Additional reporting for this article was provided by Kirby Killough and Joe Warner.