The code amendments would apply to the downtown district overlay, a geographic area ranging from FM 685 to West Pecan Street that is divided into several neighborhoods and subdistricts, which aim to define strategic areas for development. (Kelsey Thompson/Community Impact Newspaper) 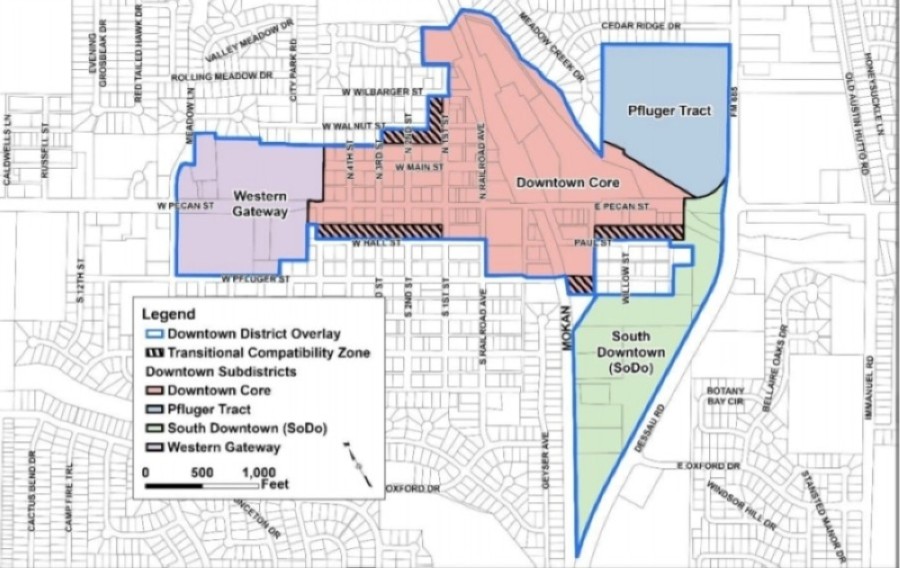 The proposed code amendments would not rezone any property, said Emily Barron, Pflugerville's planning and development services director. If approved, the changes would apply only to future property development and redevelopment and aim to define strategic areas for development, Barron said.

During a Sept. 8 council discussion, Barron said the following changes had been applied to the code amendments following residents' feedback:


Within the downtown core region—running from approximately E. Pecan Street and FM 685 on the east to W. Pecan Street and Meadow Lane in the west—a transitional compatibility zone is outlined. The zone aims to create "a smoother transition between non-residential and residential uses with context-sensitive development standards," according to city documents.

Denoted in the transitional compatibility zone are requirements and restrictions on building setbacks, maximum lot sizes, building height, landscaping and architectural standards to mirror those of the surrounding community, per documents.
RELATED STORIES

• Southside Market opens in Hutto and 3 other business updates

• Pflugerville residents and businesses will see higher utility bills this fall. Here's why.

• What to know about Pflugerville's 2020 bond package

For land use and zoning considerations, the district overlay "restricts or places additional conditions" on land uses that would have been permitted in the base zoning districts, per documents.

Barron said an example of this is, while an automotive repair shop is permitted under a GB1—or general business—land zoning, it would be prohibited under the downtown district overlay if proposed as future development or redevelopment.