The site is adjacent to a 3.8 million-square-foot distribution center currently under construction, known as Project Charm. (Miranda Baker/Community Impact Newspaper)

The city of Pflugerville is paving the way for rapid development along Pecan Street. The latest: Council unanimously voted to rezone a property of more than 150 acres, referred to as Timmerman 2020, on June 9. The site is adjacent to a 3.8 million-square-foot distribution center currently under construction, known as Project Charm.

The rezoning ordinance was approved on consent, meaning no council discussion was held prior to the vote. Council’s June 9 vote followed an approved first reading on May 12. However, the Pflugerville Planning and Zoning Commission voted 5-2 on March 2 to recommend council deny the request. 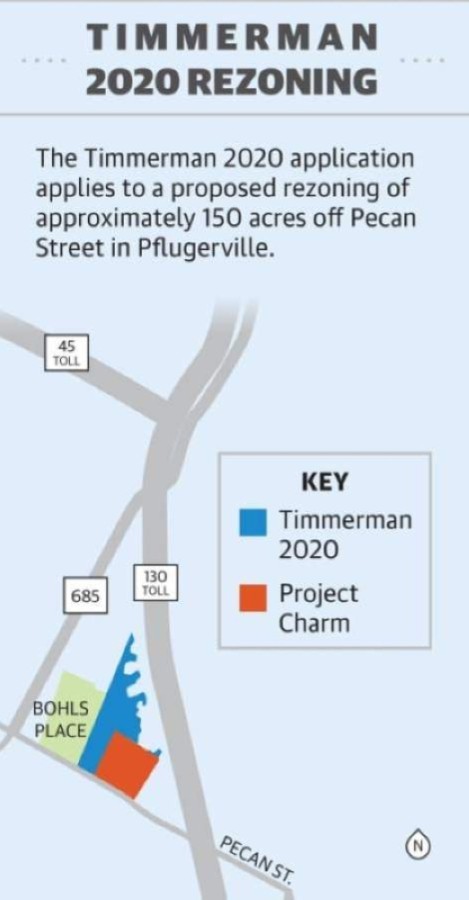 The proposed urban district would include “vibrant and walkable neighborhoods and employment centers” along SH 130 and SH 45, per city documents. The initial application requested a rezoning from the current agriculture designation and development reserve to an urban district, or CL4 zoning.

Ahead of council's vote May 12, Council Member Rudy Metayer made a motion for approval with an amendment pertaining to a CL3 zoning, or low density, suburban development with a mixture of residential and commercial spaces. The amended motion also called for a 300-foot buffer between the Bohls Place neighborhood and the development's property lines.
RELATED STORIES

• 'Putting history on the books': Pflugerville takes next steps in establishing equity commission

Following Metayer's approved motion, nearly 25 acres of the development will be classified as CL3, while approximately 132 acres will be rezoned CL4, or an urban district.

Both the CL3 zoning and the 300-foot buffer were included in the second and final ordinance reading and were approved by council.
Pflugerville City Council Timmerman 2020 Project Charm Pflugerville Development
SHARE THIS STORY