Pflugerville City Council unanimously approved on first reading the rezoning request for a 150-acre property adjacent to Project Charm and the Bohls Place neighborhood, referred to as Timmerman 2020 rezoning project. The May 12 vote followed the city's planning and zoning commission's recommendation denial March 2, cast with a 5-2 vote. Due to planning and zoning's denial, council's vote was required to be a supermajority, or a 6-1 vote, in order to pass.

The initial application requested a rezoning from the current agriculture designation and development reserve to an urban district, or CL4 zoning. Ahead of council's vote May 12, Council Member Rudy Metayer made a motion for approval with an amendment pertaining to a CL3 zoning, or low density, suburban development with a mixture of residential and commercial spaces. The amended motion also called for a 300-foot buffer between the Bohls Place neighborhood and the development's property lines.

The proposed urban district would include “vibrant and walkable neighborhoods and employment centers” along SH 130 and SH 45, per city documents. The presentation provided to council May 12 outlined a variety of permitted residential and non-residential usages. While presenting on behalf of the applicant Tim Timmerman, representative Paul Linehan said the proposed site allots for "dense, dynamic and wlakable centers for living, working and shopping." Prior to council's vote, Linehan confirmed that both he and Timmerman would be comfortable with a CL3 classification and a 300-foot buffer.

Several residents, largely from the Bohls Place neighborhood, addressed council during its virtual meeting and spoke against the proposed development. Jon Oelrich, vice president of the Bohls Neighborhood Association, opposed to request, adding that the neighborhood stands "in immediate peril" should the rezoning request be approved. 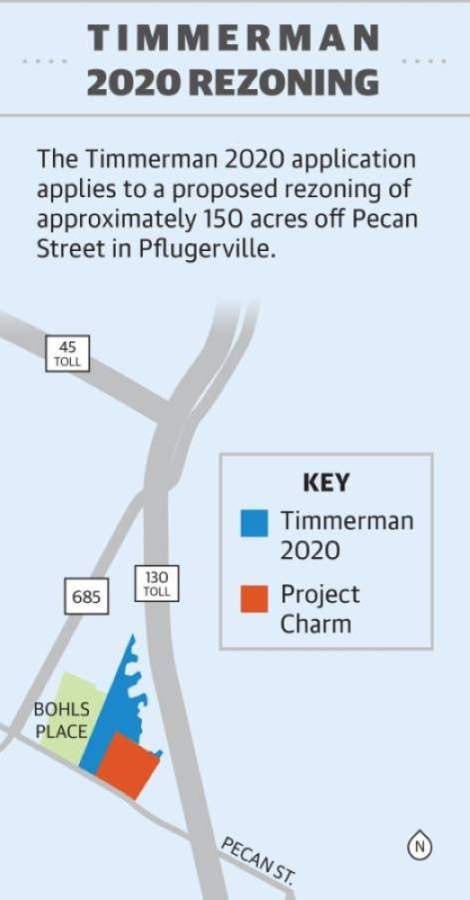 Oelrich said the neighborhood will be negatively impacted by light and air pollution, noise and traffic as a result of both Project Charm and the Timmerman 2020 rezoning. Out of several proposals Oelrich made to council, one included the 300-foot buffer existing as a greenbelt alone, with no buildings in the space.

"We're not opposed to any particular zoning application," he said. "What we need is a greenbelt buffer zone."

Resident Jeff Lopez said no felt there were no concrete plans in place for the development, adding that approval of which will leave Bohls Place "landlocked" in a highly developed space. Echoing Oelrich, Lopez said the neighborhood is united in its request for a greenbelt buffer, with some residents adding during public comment that the space could potentially be transformed into a hike and bike trail that connects to Heritage Park.

Cristine East, a resident who spoke before council, spoke against the proposed rezoning but did express her approval of a greenbelt buffer. She added that the inclusion of a greenbelt could help increase the area's property values and place Pflugerville in a stronger place, value assessment-wise.

"Those green spaces mean a lot to property values, and they mean that people want to live in our area," she said.