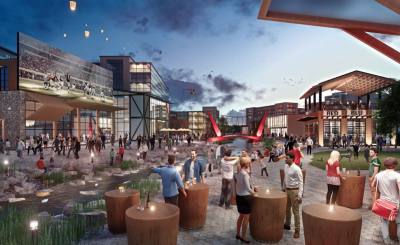 Pflugerville City Council has taken the next step in approving plans for a proposed mixed-use development along SH 130. Council voted 6-0 in favor of rezoning land for the project on first reading at its Oct. 8 meeting. Council Member Mike Heath was absent for the vote.

The rezoning proposal, which requires two Council readings and votes, would change the land use from the current CL-4 designation, an urban code that outlines "walkable neighborhoods and employment centers," per city documents. If approved on second reading, scheduled for Oct. 22, the site would be rezoned as a planned unit development district, or PUD, in order to "establish a compact, walkable development, with open space provided throughout," per city documents.

To help mitigate traffic from the site, the proposal includes an extension of Geraldine Drive through the west tract and Colorado Sand Drive through the east tract. Street cross sections included in the PUD proposal would allow for parallel parking within specific parking lanes, wide sidewalks, trees and public utilities in the right of way, per city documents.

The vision for the project, as outlined by Pflugerville Planning Director Emily Barron, is to offer a mixed-use of residential living and employment centers, with medium and high-density residential units.

Both the city's Planning and Zoning Commission and Parks and Recreation Department recommended approval of the ordinance, outlining that a PUD would establish "multiple opportunities, flexibility and certainty" for the project as it begins its development process.
SHARE THIS STORY