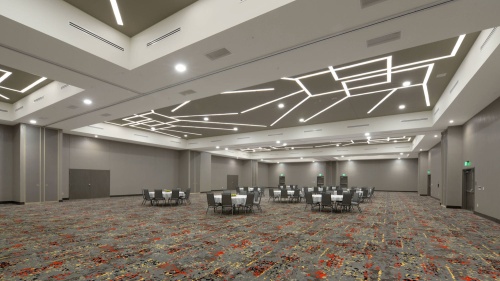 An agreement between developers and the city of Pflugerville allocated a majority of HOT funds collected from the city's first four hotels to go toward the conference center.

Plans are in place for the development of four hotels behind Stone Hill Town Center and another in the 130 Commerce Center near the city's two existing hotels.

Site plans have been submitted for a Holiday Inn Express, Home2Suite and Tru by Hilton in the Stone Hill Town Center, according to Terri Toledo, communications director for the city. Toledo said the city has not yet received plans for a La Quinta del Sol, however Stone Hill Town Center developer and broker NewQuest Properties says it is coming.

The Home2Suite and Tru hotels are both owned by Hilton and will occupy the same building with a shared lobby, Toledo said.

Rebecca Le, vice president of Houston-based NewQuest Properties, said Holiday Inn Express, Home2Suite, Tru by Hilton and La Quinta del Sol will all be located west of the Super Target in Stone Hill Town Center. The 196 acres of Stone Hill continues to be developed with national and local retail, restaurants and entertainment venues

Per Toledo, the Home2Suite and Tru by Hilton hotels submitted plans for a combined 5-story hotel with a room count of 179 rooms. A statement from NewQuest said the four hotels are expected to be ready to open next fall.

Although a site plan has not been submitted, plans are also underway for a Fairfield Inn at the 130 Commerce Center near the Courtyard by Marriott property. Fairfield Inn is a Marriott brand.

"The city of Pflugerville has not only become the third-fastest growth city in the U.S. but has also undergone rapid visitor growth. This has set in place the demand needed to warrant additional hotels for our area," said Amy Madison, executive director of the Pflugerville Community Development Corporation. "Our proximity not only to the Austin Executive Airport, but also Austin Bergstrom International Airport has contributed to an excellent location for hotel expansions."

A 2014 incentive agreement requires the city to contribute a portion of hotel occupancy tax collections from the next three hotels to open doors in the city to the conference center at the Courtyard by Marriott.

The Chapter 380 agreement, which has been in place since 2014, mandates that a majority of the hotel occupancy tax revenue collected from the first five hotels in the city go toward the maintenance and operation of the conference center at the Courtyard by Marriott.

In June 2014 the city signed the Chapter 380 agreement with the developers of the Courtyard by Marriott, SRH Hospitality. The agreement states that 100 percent of hotel occupancy taxes collected at the Marriott would go toward the conference center along with 75 percent of the HOT funds collected at the city’s next four hotels for a decade after each hotel opens.

The first hotel to contribute HOT funds to the city was the Best Western Plus Pflugerville Inn & Suites, which opened in 2016 followed by the Courtyard by Marriott hotel and conference center in May 2017. Both hotels are located on the southwest corner of the SH 130 and Pecan Street intersection.

The HOT fund contributions are to help with the cost of furniture, fixtures, equipment purchases as well as operations, maintenance and repairs, marketing, debt service, capital improvements of the conference center, according to the agreement.

According to the agreement, hotel occupancy tax incentives end in 30 years and are capped at $625,000 per year.

Currently the Best Western Plus is the only hotel contributing to the incentive agreement which means 75 percent of the HOT funds collected from Pflugerville's next three hotels will go toward the conference center.

The city currently collects a hotel occupancy tax rate of 7 percent, the highest rate permitted. In fiscal year 2016-17, Pflugerville collected a total of $149,897 in HOT funds. Of that total, $133,664 went to the conference center at the Marriott and the remaining $16,223 was used by the city for promotional purposes.