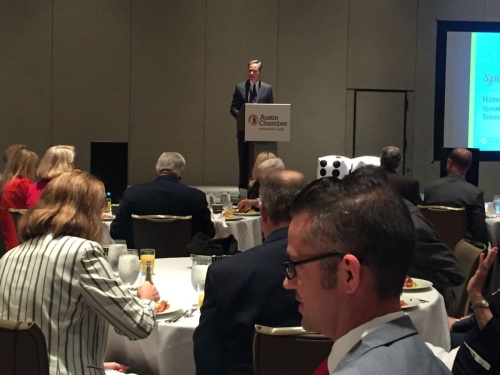 The Austin-Round Rock Metropolitan Statistical Area is in the mix when it comes to enticing Amazon to build its second headquarters complex, according to Kerry Hall, Austin Region president of Texas Capital Bank and the vice chairwoman of economic development for Austin Chamber of Commerce.

Hall, in comments at the chamber’s Opportunity Austin fall investor breakfast on Thursday, said 40 to 50 properties in the Austin region were studied as possibilities for HQ2. The project is expected to bring 50,000 new jobs with an average compensation exceeding $100,000 over the next 10 to 15 years. HQ2 is also expected to have more than 8 million square feet of building space and $5 billion in capital expenditures.

“Amazon has a specific list of what they want,” Hall said. “A lot of time was spent [putting together a proposal].”

The Austin-Round Rock MSA is the 35th largest metropolitan area in the United States according to the U.S. Census Bureau and includes Travis, Williamson, Bastrop, Caldwell and Hays counties. Amazon asked for one proposal per MSA with a list of properties narrowed down to the best sites.

In its request for proposal released Sept. 7, Amazon asked for responses from North American cities by Oct. 19. A final site selection and announcement will come in 2018.

Amazon has a wish list that includes a metro of more than 1 million people, a nearby international airport and major highways, according to the RFP.

Texas House of Representatives Speaker Joe Straus told chamber meeting attendees that companies like Amazon show the need for Texas to be “at the top of our game."

“It’s not about tax breaks and incentives,” said Straus, a Republican from San Antonio. “[Our success] begins with education. The best schools attract the best jobs.”

In the spirit of the Amazon discussion, Straus offered a new initiative, a Select Committee on Economic Competitiveness, that will help “reassert that Texas is fully committed to growth,” he said.

Straus said the focus on education funding and opportunities will be priorities, and addressing business issues that will allow for growth. He asked for the chamber’s investors to be part of the discussion.

“The stakes are high and the opportunities are great," Straus said. "The world is watching. CEOs are watching.”