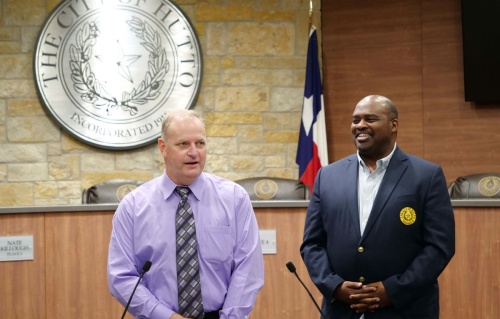 UPDATED: 7:25 a.m. Aug. 29
A city of Hutto spokesperson said in a text message that City Manager Odis Jones has withdrawn his name from consideration for the Gainesville city manager position.

ORIGINAL STORY: 6:09 a.m. Aug. 29
Hutto City Manager Odis Jones was listed as one of 55 applicants for the position of city manager of Gainesville, Florida.

According to www.gainesville.com, Jones was among the applicants from a search July 9-31. Jones has been Hutto City Manager since November 2016.

The next Gainesville city manager will replace Anthony Lyons, who resigned before being fired, according to the Aug. 7 story on the Gainesville website, part of The Gainesville Sun newspaper. The city of Hutto neither confirmed or denied the information Wednesday night.

“Following Lyons’ departure, commissioners have stressed the importance of their next manager having great communication skills – a concern that partly led to Lyons’ resignation – and someone who has knowledge in smart city technologies, in hopes of building off some of the success Lyons had during his tenure,” the website said.

Jones and the city of Hutto have filed a lawsuit and received notice of a countersuit for a large multi-use development that includes baseball stadiums and fields, hotels, retail, restaurants and residential properties.

On July 2, 2018, Community Impact Newspaper reported Jones was a finalist for the city manager position in Aurora, Colorado. Later in July, Jones renegotiated his contract to a base pay of $275,000, an increase of $80,000 from his previous pay.

Jones was still listed as a candidate on the Gainesville website again on Aug. 12. Gainesville is a city with an estimated population of more than 133,000.
SHARE THIS STORY