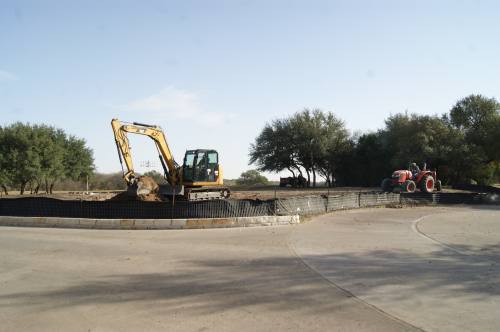 Renovations to the golf course are in full swing at Forest Creek Golf Club.

Thursday marked the last day to play a hole at Forest Creek Golf Club before the course completely closed for renovations.

The first nine holes closed and renovations began Dec. 1. General Manager Jeff Dayton said the holidays and freezing temperatures prevented a lot of work from getting done, but since Christmas, the work has accelerated.

“We have been anticipating this day all year,” Dayton said Thursday.

“It will still be a challenging course but more playable for the average golfer,” Dayton explained.

When the weather is warmer, crews will begin the final step: putting out seeds. The course’s grass will be TifEagle Bermuda, which Dayton said is one of the best grasses in the industry. The plan is for the seeds to be planted around the first week of June and—weather permitting—for the course to reopen around Aug. 1.

“It’s a long time to be down, but it will be worth it,” Dayton said. “Our goal is to be the best in class in this area.”

The renovation plans also include replacing seven of the nine bridges on the course, with minor improvements to the other two bridges. The new bridges are being prefabricated.

“It’s not something you get to do every day—renovate a golf course,” Dayton said. “There are so many moving parts in this process, and we are just watching it unfold before our eyes.”

Improvements are also planned for the course’s driving range, including the installation of 50-foot nets and lights, allowing for nighttime play.

Golfers will have the opportunity to view the process on Jan. 24 at an unorthodox Groundbreaking and Demo Day event. Participants are invited to “take out years of frustration” on the Number 8 green, which Dayton said has been a spot of frustration for golfers for years, by creating divots in the green with their clubs. Round Rock Mayor Craig Morgan will make the first divot at 4:30 p.m., and prizes will be awarded for the biggest divot. Before the “demolition,” there will be a putting contest at 3 p.m.

The clubhouse will remain open for events for the duration of the renovations, and the restaurant will be open a few days per week.

The total budget for the renovations is about $3.9 million, which will come from city savings. In November, the City Council approved an agreement with Mid-America Golf and Landscape Inc. as the contractor for the project.