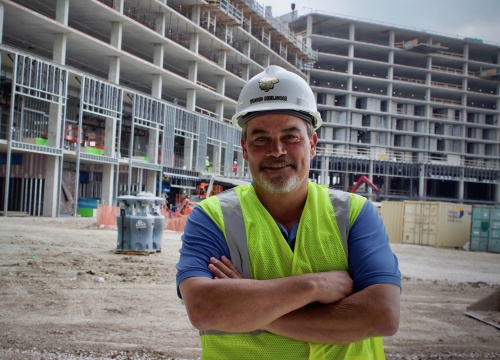 Kalahari owner Todd Nelson said despite a rainy year, the project is on track for a November 2020 completion.

One year after breaking ground on Kalahari Resorts & Conventions, the project is on schedule for a November 2020 opening date.

"The progress is incredible," Kalahari owner Todd Nelson said. "I’m so proud of our guys."

Plans for the resort---located at Kenney Fort Boulevard and Hwy. 79 in Round Rock---include 1,000 hotel rooms, a 200,000-square-foot convention center and the largest indoor water park in the country.

Since the project started last May, the site has weathered 158 million gallons of rainfall, according to Kalahari staff.

“The biggest challenge has been the weather," Nelson said. "But our general contractor has kept us on schedule. They’ve fought through it all.”

Austin-based Hensel Phelps is the general contractor on the project. An average of 700 construction workers are on-site per day, Nelson said. This number is expected to increase to 1,300 over the summer.

Round Rock's Kalahari is the company's fourth resort, and its first in Texas.

“This is the largest project we have ever done," Nelson said. "The old saying, ‘everything’s bigger in Texas?’ It’s true.”

“Everything here will be the nicest we have," Nelson said. "We try to get better every time we build a new one.”