Kalahari construction underway in Round Rock 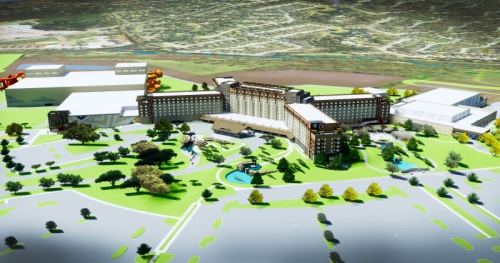 Kalahari Resorts and Conventions broke ground on its fourth resort May 15. The Round Rock resort and convention center will offer a variety of attractions for not only guests but also the public.

Dirt is turning at Kenney Fort Boulevard and Hwy. 79, bringing Round Rock one step closer to a development that will offer residents new restaurants and entertainment options.

At the May 15 groundbreaking, Kalahari owner Todd Nelson announced features and specifications of the development, all of which will be open to not only resort guests, but also the general public.

“This is going to be our biggest and best ever,” said Travis Nelson, Todd Nelson’s son and a part-owner of Kalahari. “[Round Rock] is going to get the best of everything we have to offer.”

An indoor theme park called Tom Foolery’s will cover more than 80,000 square feet of the resort. The park will include an indoor zipline, laser tag, mini-golf, and redemption games and prizes.

Inside Tom Foolery’s will be B-Lux, a restaurant that specializes in burgers, shakes and fries. The restaurant will feature 12 bowling lanes. The resort will also include an Italian restaurant, pizzeria and gelato shop called Mondo Sortino’s; Kalahari’s signature steakhouse, Double Cut Charcoal Grill; and Tex-Mex restaurant 5 Niños, among other restaurants.

The Round Rock Kalahari will also be home to the country’s largest indoor water park, planned to span 223,000 square feet, in addition to outdoor pools built over 3 acres.

“Texas is somewhere we have always wanted to be,” Travis Nelson said. “With Round Rock being the ‘Sports Capital of Texas’ and this site right across the street from Dell Diamond, it’s wonderful.”

Coincidentally, Dell Diamond was designed by Dallas-based HKS Architects and constructed by Hensel Phelps Construction Co., both of which are working on the Kalahari project.

Another requirement of the agreements is for Kalahari to construct at least 975 hotel rooms. As of March, there were about 3,000 hotel rooms in Round Rock. Kalahari plans to add 975 rooms, increasing the total number of hotel rooms in the city by more than 30 percent. Hotel occupancy tax revenue for the city is currently trending well above the state average and even higher than Austin. Round Rock currently boasts a hotel occupancy rate of 77 percent, one of the highest in the state.

The city’s largest hotel is currently the Austin Marriott North, located at 2600 La Frontera Blvd., which has 295 rooms and contributed $863,422 in hotel tax revenue for the city in fiscal year 2016-17.

Susan Morgan, chief financial officer for the city of Round Rock, said hotel tax revenue from Kalahari will fund the incentives and rebates for the development. The funds will also go toward the construction of transportation improvements on the site.

After the payment of debt and incentives, Morgan said the city expects to see about $4.7 million in yearly tax revenue from Kalahari property taxes, a portion of sales tax and a venue tax.

Round Rock’s principal taxpayer for fiscal year 2016-17 was Dell Computer Holdings, LP, which contributed more than $390 million to the city’s tax base.

Round Rock will collect a 2 percent venue tax on each hotel room purchase that will go toward the Round Rock Sports Center.

“It’s something very different from any other industry we have,” Morgan said. “It’s very  diverse, that’s part of what makes it so valuable.”

Round Rock will own the convention center, allowing the city to take advantage of a hotel tax rebate. Kalahari will be responsible for its maintenance.

“There is going to be job creation and tax creation and that’s great, but we are also going to be involved in local charities and local events and really becoming involved in the community,” Travis Nelson said. “We are a family, and we can’t wait to make Round Rock a part of our extended family.”