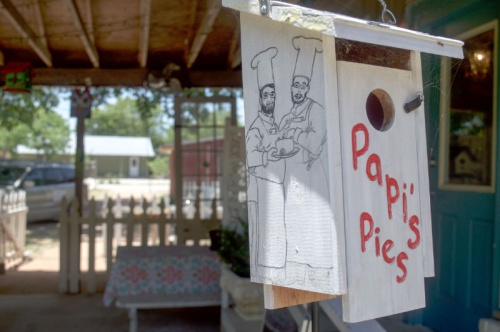 Jose Parra and Julio Palacios, co-owners of Round Rock bakery and art gallery Papi’s Pies, both have extensive ties to the local art community. Palacios, an avid photographer, currently serves as vice president of the Round Rock Symphony and Parra is a stained glass artist.

When the two of them opened Papi’s Pies to the public in February 2017 they said they wanted the bakery and cafe to also provide a space for Round Rock’s art community.

“We know [Round Rock is] the Sports Capital of Texas, but the art we have, it’s amazing,” Palacios said.

Papi’s Pies hosts gallery openings on the third Thursday of every month and has done so since they first opened. In all the cafe has hosted more than 15 shows in its 5-table cafe. According to Parra and Palacios, their cafe provides much needed space for solo-artist galleries in Round Rock.

“When you go to a gallery [in Round Rock] normally it’s three, four, five or six different artists, and they only get to show one or two pieces,” Palacios said. “I think [solo shows are] very important for one artist; it’s very important to show more than one piece.”

Papi’s Pies originally made Mexican desserts exclusively for local restaurants. Parra started baking for one restaurant in 2012, but now the business delivers assorted desserts to 20 restaurants across Williamson County. Traditional Mexican desserts are sold at the Round Rock bakery, including treats such as Mexican wedding cookies and tres leches cake.

But Papi’s Pies signature item—the salteña—is a cultural keepsake from Palacios’ native Bolivia. A salteña is similar to an empanada, according to Parra, but the savory pastry is baked not fried. The baking process leaves a spicy broth inside the pastry pocket.

The bakery and gallery have so far experienced limited growing pains due to continued support from the Round Rock community. Parra and Palacios have aspirations to expand the business to include a dinner menu at some point, but for now, according to Palacios, Papi’s Pies is focused on its galleries and service.

“We like art; we’re artists, and we want to make sure we get art in front of folks,” Palacios said.