The meeting room at the Pflugerville ISD Administration Building was at capacity during an Aug. 16 special meeting. (Brian Rash/Community Impact Newspaper)

The day after Pflugerville ISD Superintendent Doug Killian sent a letter to parents and staff informing them the district would implement a mask mandate, the board of trustees met for a special meeting to continue a discussion of mask-wearing.

People vehemently opposed to and in favor of a mask mandate within PfISD stood outside with signs and began filtering into the meeting room of the district's administration building well ahead of the Aug. 16 meeting's 5 p.m. start time. 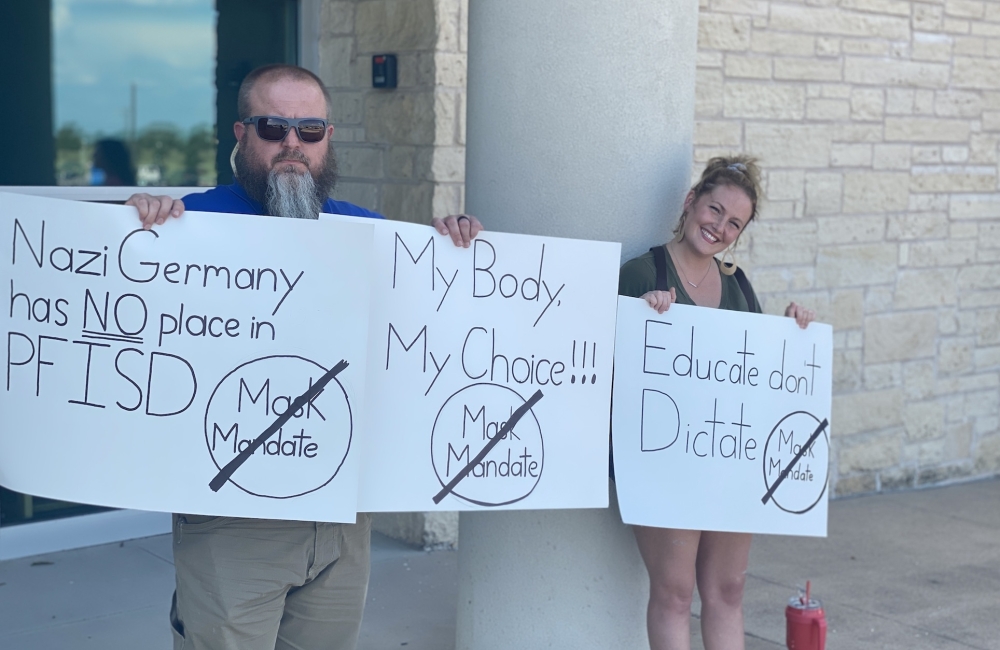 On Aug. 15, Killian told district staff and parents that it has always been the intent of PfISD officials to follow the law, regardless of what it dictated.

Killian said in his letter it was a district court decision from 345th District Court Judge Jan Soifer granting a temporary restraining order to block Gov. Greg Abbott's executive order prohibiting mask mandates in school for students and educators that prompted officials to reverse course from a previous decision not to mandate masks.
RELATED STORIES

• Travis County ESD No. 17 will hold elections to annex Pflugerville, adjacent area into its taxation boundaries

• Improvements to E. Pecan St. and SH 130 will result in closure of Impact Way

During the Aug. 16 special meeting, officials heard from speakers who are planted firmly on both sides of the issue.

Ashley Ramirez, who said she has children enrolled in PfISD, told the board she is opposed to a mask mandate.

Masks essentially hinder students in myriad ways when they are trying to learn, including making it difficult to hear and understand their teachers, Ramirez said.

Several attendees at the Aug. 16 meeting agreed with Ramirez, stating masks do not work and admonishing the board for not giving parents a choice.

However, many also spoke adamantly in favor of the mandate, citing a need to protect those in the community with health issues who are put further at risk by rising COVID-19 cases.

Attendee Anastasia Marston said she believes masks are a key way to help stop the rapid spread of the coronavirus.

"Politics is making this thing more fraught than it needs to be," she said. "The most I can do is ask you to please stand by your instincts. ... Do what it takes to protect the most students possible."

Attendee Jeffrey Moss said it is more important to follow scientists and doctors rather than those who are not experts in the matter.

Ultimately, whether speakers were in favor of or opposed to the mask mandate, there was no middle ground for the several people who spoke at the special meeting.

Following public comment, the PfISD board of trustees went into executive session to discuss options regarding lifting or continuing the mask mandate, but one district staff member said no action would be taken at the Aug. 16 meeting.
Doug Killian Pflugerville ISD Coronavirus (COVID-19) Pflugervillle Pflugerville Education
SHARE THIS STORY

Fairways of Blackhawk under new management by Associa Hill Country

Property management company Associa Hill Country has been selected to manage Fairways of Blackhawk in partnership with the community’s board of directors.

According to a Sept. 13 memorandum from Travis County’s 200th Civil District Court Judge Jessica Mangrum, the lawsuit has been dismissed, and the court will not be ruling on the temporary injunction.