At one point in mid-December, a time of the year when demand for homes usually slows down, there were 20 offers on one resale home in Hutto, according to local Realtor Katie Evans.

The unusually high number of offers at a time when experts say demand tends to fall is indicative of an emerging challenge in the area—as Pflugerville and Hutto continue to see strong population growth, the supply of housing must keep up, Evans said.

“I’m honestly a little scared of what the spring is going to bring us, because things have not slowed down to the degree I would expect,” Evans said.

In order to accommodate the two-pronged problem of rapidly rising population in combination with substantial increases in housing costs, area officials and developers are working to bulk up the number of housing units available for residents as well as continue diversifying options for housing.

From single-family rental homes to apartments, condos and duplexes, housing units and options in Pflugerville and Hutto are growing, but local officials and developers are not certain the efforts will keep pace with demand.

T.C. Selman, vice president of Aspen Heights, a developer with housing projects in the works in Hutto and Round Rock, echoed Evans’ assessment.

Selman went as far as to say he does not expect area housing supply to catch up for several more years.

“[Supply] is still vastly behind what the needs are for the growth of the areas,” he said. “By 2024, I think maybe the volume will have reached back to the level that is necessary for the growth.” 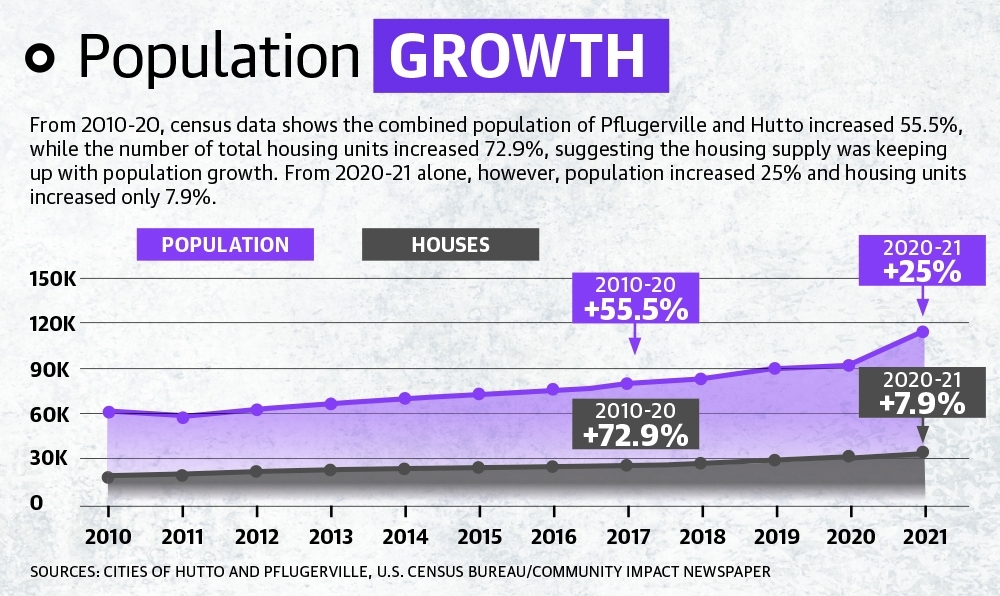 Figures from both cities paint a picture of accelerated production in the last two years with no indication of slowing the pace.

By comparison, there are about 9,000 housing units either in planning stages or under construction in Hutto, according to Ashley Lumpkin, the city’s executive director of development services.

In Pflugerville, city data show more than 11,000 housing units are either in the planning stages or under construction and will be complete within the next several years.

Data from the U.S. Census Bureau suggests the local housing supply was holding strong in 2020. The vacancy rate—a measure of the percentage of a city’s housing units that are unoccupied—held strong from 2010 to 2020 in both Pflugerville and Hutto.

Comparable data is not yet available for 2021, but Evans said she is unsure whether the area’s supply of housing is still in a position to keep up with growing demand.

While housing production has accelerated, the population for both cities is growing just as rapidly, if not faster.

Although census figures are not yet available beyond 2020, estimates from both cities show that in just one year, Pflugerville has grown another 16.5% and Hutto approximately 45%, to total populations of 75,956 and 40,000 respectively.

Pflugerville Deputy City Manager Trey Fletcher said in many ways the city is a victim of its own success. Not only does the city have a prime location in the Austin metro, its quality of life is improving, he said.

“Therefore, the demand for housing is outpacing the supply of new housing construction,” Fletcher said via email.

A vital tool for the city has been its Aspire 2040 Comprehensive Plan, which is planned for completion this year and includes policies and recommendations to help plan for Pflugerville’s growth, Fletcher said.

“The Aspire 2040 Comprehensive Plan will make recommendations for diversification of land use and housing as we continue to grow,” Fletcher said. “Different land use types [help] to balance all the needs of our residents, including affordability.”

According to market analytics from the Austin Board of Realtors, in November the median price of a home in Pflugerville was $400,000, a 42.9% increase over the previous year.

To address the issue of affordability and ensure prospective residents can find a place to live, developers and local officials have been reconsidering what types of housing they should bring to Pflugerville and Hutto. 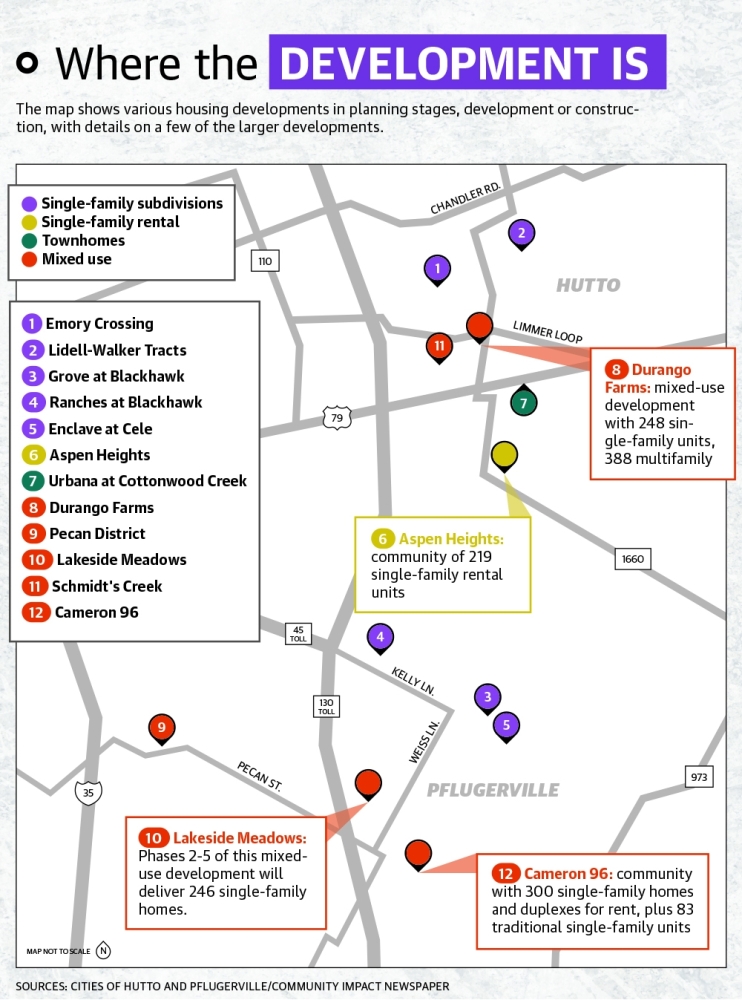 In Hutto and Pflugerville, officials agree that diversifying housing is crucial to creating more financial accessibility. That means zoning for more housing types that include duplexes, condominiums and apartments.

Both cities are working to include more affordable options. In Pflugerville, City Council has recently rezoned land for single-family rental communities as well as more apartments.

Apartment complexes are slated to deliver more housing units in the coming years in Pflugerville, including Star Ranch with 336 multifamily units and Village at Wells Branch, which will contain 506 multifamily units.

Similarly, multifamily and other housing types are ramping up in Hutto.

The Durango Farms project in Hutto is expected to bring 388 multifamily units to the city, and a recently approved project by Aspen Farms will bring additional multifamily housing.

One housing type that is trending locally and beyond is single-family rental units. Area experts say they offer amenities not normally provided through traditional apartments and are more attainable financially than standard single-family detached homes for sale.

A development by Aspen Heights in Hutto will bring 219 rentable homes to the city. Construction on the community is expected to start in mid-2022, according to Selman.

“Populations demonstrated they want a rental home, but not an apartment because their life stage demands that they need more space,” said Todd Larue, managing director of real estate consulting company RCLCO.

As local initiatives to match housing supply with population growth continue to gain momentum, local officials also say it is important to maintain a balance between the needs and expectations of existing and potential residents.

Ashley Lumpkin, Hutto executive director of development services, said while the city will continue to develop new housing to accommodate future residents, her priority is doing so in a way that does not compromise what those already living in the city want to see.

Lumpkin said public outreach will continue to be a critical component toward striking a balance between housing diversity and ensuring a wide range of people can find a home in the city.

“We have to consider where we are now and what our needs are right now for our current residents,” Lumpkin said. “We’re having a discussion with the community on what we want to look like and how we can come up with a framework to fit that all together.”
Pflugerville Hutto Pflugerville-Hutto Aspen Heights U.S. Census Bureau
SHARE THIS STORY