As continued population growth and development opportunities linger on the horizon, conversations surrounding downtown revitalization have re-emerged as a means of deciding how best to preserve the historic integrity of the city and establish a sense of place and identity. (Kelsey Thompson/Community Impact Newspaper)

In the 161 years since Pflugerville’s founding in 1860, its downtown has gone from the sole business corridor for a small handful of residents to a historic neighborhood within a city of more than 70,000.

As continued population growth and development opportunities linger on the horizon, conversations surrounding downtown revitalization have re-emerged as a means of deciding how best to preserve the historic integrity of the city and establish a sense of place and identity.

“Downtown plays a very important cultural heritage for the community,” said Robert Romig, chair of the planning and zoning commission. “A lot of the conversation has been around the idea that we need to revitalize downtown—not in hopes that it will necessarily become the commercial nexus of the community, but that it really is, in certain ways, a cultural nexus.”

Pflugerville is in the midst of finalizing the 2040 Aspire Plan, a visionary guide for future development, city maintenance and land use. The plan—with additional community workshops scheduled in the spring and Pflugerville City Council’s expected approval in December—outlines downtown revitalization as one of Pflugerville’s targeted priorities in the next 20 years.
RELATED STORIES

However, downtown revitalization is not a new talking point among city leaders and residents. In the city’s 2030 comprehensive plan, conceptual plans detailed developing the downtown area as a “walkable, mixed-use central neighborhood center.” A March 2009 Old Town Pflugerville report documented some resident concerns over a lack of identity and visibility for downtown, particularly Main Street.

Emily Barron, director of planning and development services for the city, said that while the plan is more of a visionary guide than a concrete agenda for future development, conversations held in the planning process have addressed the potential need for arts and cultural initiatives in the downtown area.

“It’s kind of a focus to continue those efforts in bringing businesses downtown and making sure that the original heart of the city continues to thrive and provide a unique opportunity for businesses and entertainment,” she said.

Pflugerville City Council approved Oct. 27 the creation of a downtown district overlay as a means of preserving the historic and architectural integrity of the downtown area while also outlining which businesses can develop in the region. The overlay is a defined portion of the city that now has specific permitted and prohibited residential and commercial uses.

The plan does not rezone any current businesses within the corridor and is designed to allow more cohesion between prospective businesses and the surrounding residential neighborhoods. 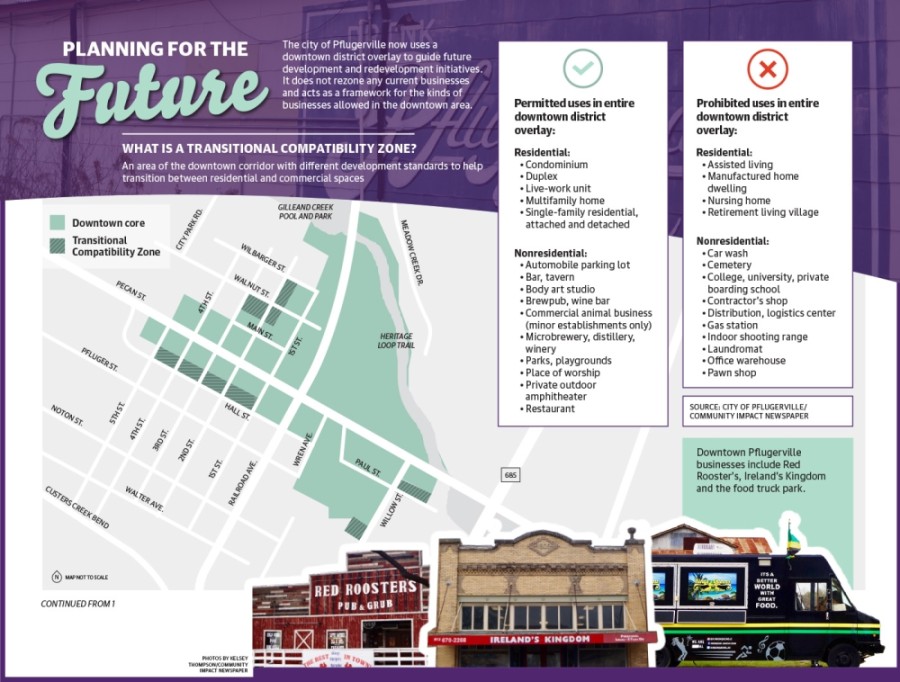 As economic development opportunities arise in the city, some residents are calling for a stronger balance between larger-scale businesses and the small, locally owned ones that help define a community.

The city of Pflugerville released a community survey in fall 2020 in relation to the 2040 comprehensive plan. Of survey respondents, 35% agreed that the city does a good job of maintaining existing businesses compared to 23% who disagreed.

Romig said the city’s goal of downtown redevelopment is not necessarily to turn it into the commercial epicenter of the city. With growth heading eastward and heightened commercial development along the SH 130 and SH 45 corridors, he said the vision for downtown is a combination of locally owned businesses and stronger arts, culture and historical elements.

“There’s recognition that while we want to revitalize downtown as our cultural heritage center, we also think of connectivity and availability of services and infrastructure,” he said.

The balancing act relies on thoughtful land use that allows for coexistence between downtown residential and commercial neighbors, resident Mike Corrales said.

Whether it is an enhanced parks attraction, an arts center or a revitalized gathering space, he said downtown needs to connect residents and define a sense of place, he said.

“What does [a sense of place] look like? It looks like local people being together, doing their own thing, whatever it is, but in the downtown district,” Corrales said. “Over time, that becomes a more distinctive community with an image, and it’s shaped by the people working with the city and allowing these things to grow organically.”

Parks and Recreation Director Shane Mize said the objective of downtown revitalization is to help establish downtown as a communal centerpiece where all stages of life—work, shopping, recreation and entertainment—coexist. Half of the battle with establishing a vibrant downtown center is residents’ accessibility to it, he said.

“Whether it’s parks, plazas or amphitheaters, or just the trails that will lead people, there are alternative transportation opportunities,” Mize said. ••When it comes to downtown revitalization, accessibility and entertainment are just two components of what help to establish a sense of place, said Pat Epstein, former planning and zoning commission chair. A critical element of downtown is its history, she said.

What was once the heart of the city, downtown Pflugerville is now on the western portion of the city as expansion heads eastward. What will help define Pflugerville’s downtown is the ability to marry its historic preservation efforts with forward-looking community initiatives, she said.