Populations in Round Rock, Pflugerville and Hutto increasingly diverse amid population growth

Data from the 2020 decennial census shows that as the populations of Round Rock, Pflugerville and Hutto have grown over the last 10 years, they have become more diverse.

The three cities’ populations grew substantially from 2010-20, with Hutto’s population nearly doubling. In that time, the growth of most nonwhite populations has outpaced general population growth.

Asian residents and those belonging to two or more races saw especially rapid growth, in some cases more than doubling their share of the local population.

The increased diversity is in line with national trends, but experts and local officials point to a number of factors that account for the growth and diversity locally.

From economic growth to people seeking refuge from explosive jumps in the cost of living in Austin, area experts say the area will only continue to draw more residents and likely lead to continuing trends in overall population diversity.

“The fact that we’re seeing an increase in that diversity in this area, I think, is a very powerful thing,” said Jason Ball, president of the Round Rock Chamber.

A breadth of economic opportunities is one major draw according to Ball, who attributes much of the rising population to a jump in opportunities available in the area.

“So much workforce, so many families, so many individuals, so many students ... are trying to make their way to Central Texas to participate in the economic growth that is happening right now,” he said.

Ball said that same economic growth, along with the Greater Austin area’s reputation for welcoming and embracing a variety of cultures, likely explains the increased diversity as well. 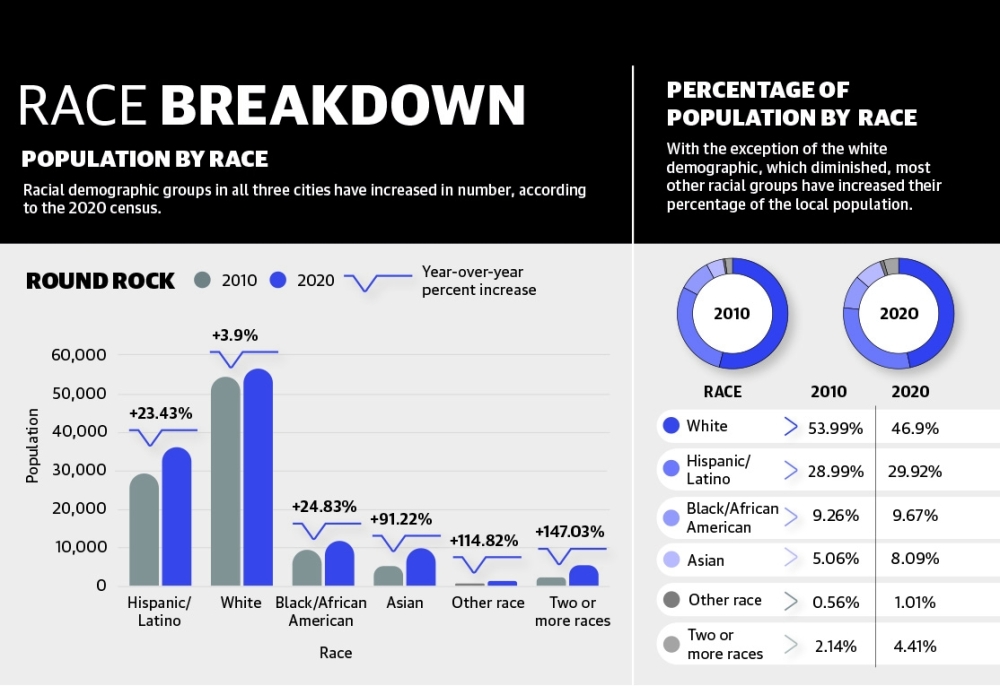 “I think the reason why Williamson County is experiencing growth in diversity is the same reason that so many people of any race or ethnic background are wanting to come here—because they are pursuing economic opportunity and career opportunity for themselves in a place where they can have the type of lifestyle that they want,” Ball said.

Henry Gideon, assistant superintendent of operations for Hutto ISD, said the arrival of companies including Tesla fuels population growth, and that growth in turn draws more companies to the area.

“Tesla, Apple, Amazon and potentially Samsung are creating a lot of movement to our region,” Gideon said. “This is on top of the existing and established Round Rock and Austin high-tech attractions. As these jobs grow, there is naturally growth in the tertiary jobs found in construction and service sector-type jobs.”

“People want to live there, demand is strong and that pushes up prices,” Torres said.

While housing affordability will likely continue to be an issue in Round Rock, Pflugerville and Hutto, it is still not comparable to Austin.

Lila Valencia, demographer for the city of Austin, suspects another reason for the increasing diversity is former Austin residents moving to neighboring cities throughout Central Texas, including in the north and northeast quadrant.

Valencia said the high cost of living in Austin may be driving residents, especially residents of color, to move to more affordable locations in the surrounding areas.

“I think that the unique pattern that we’re seeing in the bulk of the growth being driven by non-Hispanic white population is a combination of fewer people of color being able to afford to live within the city,” Valencia said. “If you are from a relatively less affluent part of the state of Texas, you might not be able to afford Austin even if you wanted to live here.”

The data support Valencia’s theory. Unlike in Round Rock, Pflugerville and Hutto, Austin’s Hispanic and African American populations both saw a slight decrease in their share of the total population from 2010 to 2020.

“That really adds to the thought that there could be some movement from African Americans and Hispanics that were living here in the city of Austin to these surrounding cities,” Valencia said.

In the Austin-Round Rock metropolitan statistical area, it is $450,000.

“If you compare Hutto to Austin-Round Rock, it’s a difference of $80,000,” Torres said. “So that shows you why I think you’ve seen that growth and population growth in minorities, because housing prices are relatively cheaper.”

As the area continues to see growth, especially in smaller cities such as Hutto, officials expect logistical challenges will arise in areas including civic infrastructure, schools and public safety, among others.

“Often these smaller cities have smaller budgets, and when they’re seeing such rapid growth, it can be very challenging to keep up with that pace of growth,” Valencia said.

Gideon said Hutto’s particularly explosive growth has created challenges for the school district as it tries to accommodate the growing population.

“[The growth] is fast and furious and it puts a lot of pressure on existing infrastructure to include utilities, roadways and new school construction,” Gideon said.

Round Rock, by comparison, has been growing for some time and officials there are very familiar with the challenges growth brings.

“The growth funds the solutions that are available to us, and but for that growth, we wouldn’t have so many options to keep that quality of life for all of our residents,” Ball said.

At the end of the day, Ball said the growth is ultimately a positive force, and growing pains are a challenge he is happy to face.

“That is definitely the better problem to have,” Ball said. “There are many areas, particularly in more predominantly rural areas, that are experiencing population decline. While we’re trying to find creative ways to manage that growth and do it in a sustainable way, there are other areas that don’t have that opportunity.”