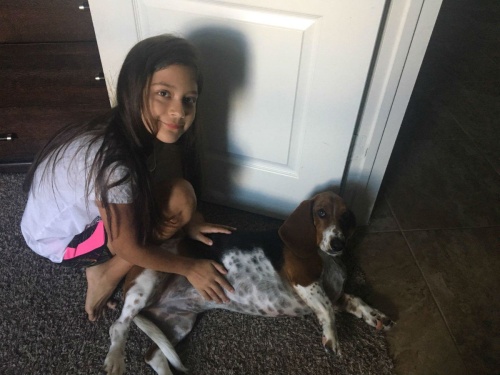 During his 13 years with the Pflugerville Police Department, Sgt. Kurk Anderson said he has experienced plenty of heartbreak.

That was the day Anderson and his wife, Kimberly, found out their 9-year-old daughter, Camryn Escobedo, has a serious health issue. More testing showed she has aplastic anemia, which occurs when the body stops producing enough new blood cells, according to the Mayo Clinic. Without a bone marrow transplant, Anderson said their youngest of five children will likely live less than a year.

“Camryn is an active 9-year-old kid. She has lots of friends,” Anderson said, sitting behind a desk at the Pflugerville Police Department on Friday with his head in his hands, his voice cracking. “She had some bruises that weren’t healing, so we took her in. I thought the doctor would say she has an iron deficiency and needs to eat peanut butter or something like that. But it wasn’t good. The last week seems like forever.”

Anderson said it was the day their lives changed. Escobedo is at home in her room. Simply going outside could expose her to illnesses her body will not be able to fight.

“A common cold is life threatening,” Anderson said. “For me to be able to sit down and ask for help is extremely hard, but we need help.”

Anderson said treatment leading up to and including a transplant means chemotherapy and other care that will produce medical bills between $300,000 and $880,000. Her best chance for a match is her biological brother. He has been tested and results are pending.

When Pflugerville Police Chief Jessica Robledo found out about Escobedo, her morning workout routine took a right toward a church that has a bench outside.

“I like to sit there after my run and get right,” Robledo said. “I asked for guidance and courage to support this department and police family and Camryn with a pure heart. And I sent a text to everybody and said be in my conference room, because we are about to blow this out of the water. I may have used different words.”

Robledo said her team brainstormed and decided to do a fundraiser with the community. Two days later, dozens of volunteers and local business leaders have pledged their support for a Sept. 15 event that will help offset the cost of care.

A BBQ fundraiser and blood donation drive will be held at the Pfield, 1440 W. Pecan, Pflugerville. Blood donations are needed and potential transplant donors can register for several hours. Doing so only takes a few minutes, according to local residents who have registered.

According to a Facebook page promoting the event, there will be music, games, a car and motorcycle show and other entertainment. Also, according to Anderson:

·      The fundraiser will take place from 10 a.m.-2 p.m., with all proceeds going to this GoFundMe account

·      BBQ plates and raffle tickets will be for sale for $10 each. Food will be donated by Brotherton’s BBQ and Elgin Sausage. Tickets are available at the Pflugerville Police Department

·      Participants may register to be a bone marrow donor with representatives from Be The Match. Once registered, a kit will be sent for a cheek swab sample and then is returned.

The community event, Robledo said, is a tribute to a great family and a department she asks to serve with a servant’s heart.

“I believe that we are all here and we don’t carry a story that was written a long time ago,” Robledo said. “What you choose to do with yours is your own decision. Camryn is a part of us and we will do everything we can for her.”

Appreciative of what has come together in two days, Anderson said he is mindful of the struggle ahead.

“The outpouring we’ve had has been phenomenal,” Anderson said. “There are so many people out there with sick kids who don’t have the support and access I have. Maybe we are able to help some of them, too. For the first time during this week, I have some hope that we will actually find a match. Hopefully we can.”