After previous attempts to gain approval of citywide transit plans died on the ballot in 2000 and 2014, Capital Metro and city of Austin officials celebrated voters passing the $7.1 billion Project Connect plan late Nov. 3.

Project Connect promises to ultimately deliver a widespread network of rail and bus lines that will connect riders to transit across the city, from Northwest Austin to Austin Bergstrom International Airport. But as early vote totals began to roll in on Election Day, precinct results showed that voters in Austin’s core and residents living east of I-35 ultimately delivered the results local transit planners were hoping for.

"We have tried this election more than once, and it is about time that we moved it across the goal line. This is a city that said they want to do something about traffic and at a scale equal to the challenge it faces—a city that recognizes our responsibility to climate change," Austin Mayor Steve Adler said Nov. 3. "Really, importantly, [this is] a city that wants us to do everything we can for equity and justice and fairness, and mobility, actually, is a big part of that."

Proposition A, the ballot item associated with the Project Connect plan, passed with 57.93% of the vote—240,693 votes to 174,766 against—across Travis, Williamson and Hays counties.

With all precincts reporting early votes and Election Day totals, a clear line emerged dividing support and rejection for Capital Metro’s Project Connect plan. Less than a handful of the more than 50 Travis County voting precincts that voted against Proposition A are located east of MoPac. 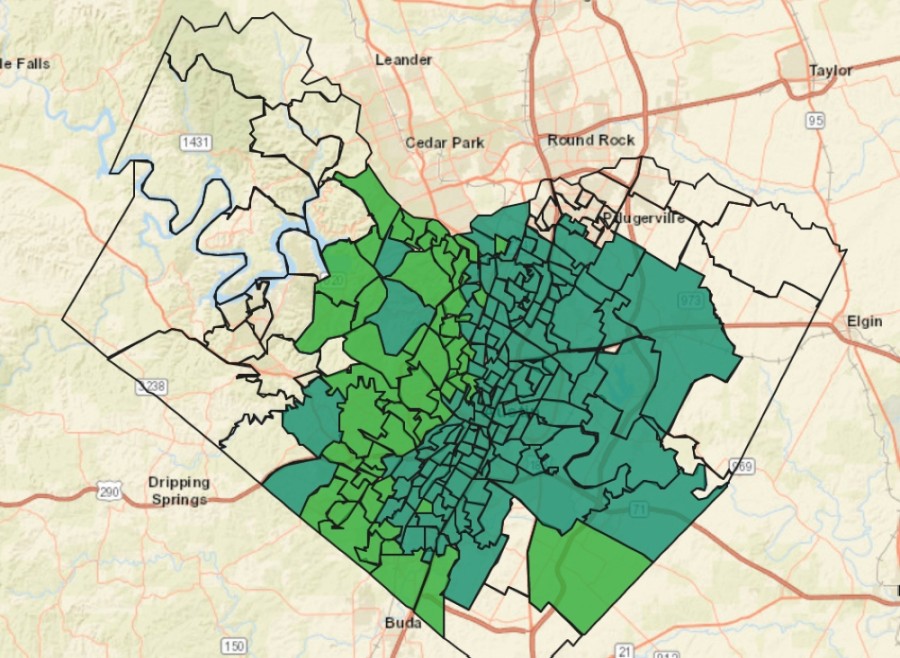 The majority of Project Connect’s cost—about $5.8 billion of the $7.1 billion—will go to two new light rail lines and a downtown tunnel separating trains from street level. The Orange Line will run north-south from the North Lamar Boulevard area to South Congress Avenue, and the Blue Line will run from the airport through downtown and up North Lamar, alongside the Orange Line.

In the plan adopted by Capital Metro and approved by Austin voters, the overwhelming majority of transit services will be built east of MoPac. A future MetroExpress line from Burnet Road to Menchaca and Oak Hill, some on-demand pickup and drop-off circulators, new park-and-rides and some MetroRapid stops are shown planned for large swaths of West Austin and West Travis County.

While voters in those areas clearly rejected Project Connect, local officials have contended that the holistic effect of enhanced transit options will benefit the entire region, not just residents east of MoPac.

“I wouldn't be surprised if the people who were the furthest away from the high-profile lines were the least positive. But to those folks I would say, No. 1, we're talking about taking almost 280,000 car trips off the road, and if we can accomplish that, we're going to make life better in this community,” said Wade Cooper, chair of the Capital Metro Board of Directors, to Community Impact Newspaper. “Whether you're taking the train or bus or not, those are people who would otherwise be on Lamar, MoPac or I-35.”

Jack Flagler and Olivia Aldridge contributed to this report.