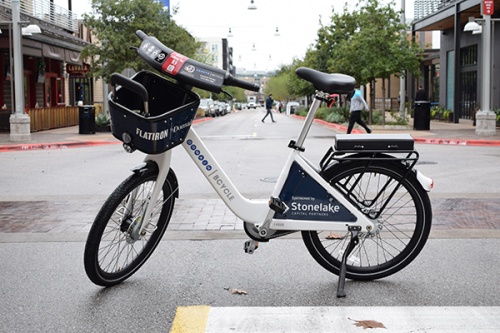 Bike Share of Austin, the nonprofit that operates Austin B-Cycle, announced it will launch a bike-sharing program at The Domain in February.

Visitors to The Domain will soon have another option for getting around the outdoor mixed-use development in North Austin.

Bike Share of Austin, which is the nonprofit operator of Austin B-cycle, announced Jan. 30 it is launching a bike-sharing program at The Domain called Domain BCycle, starting Feb. 16.

“As Bike Share of Austin looks to expand shared-use vehicle services in Austin, we are thrilled to be working with our community partners to bring cutting edge technology in the next step in bike share to The Domain,” Executive Director Elliott McFadden said in a news release.

The nonprofit is partnering with Stonelake Capital Partners and The Domain Property Owners Association to deploy 100 B-cycle Dash smart bikes that have on-board computers. An interactive screen with GPS will display directions and how to rent the bikes.

“With our concentration of high-tech employers, residents, and retail, The Domain is now Austin’s second downtown,” said Heath Johnson, managing director of asset management at TIER REIT and head of The Domain Property Owners Association, in a news release. “We are excited to partner with BSA in providing a premier and locally operated bike-share service that will offer easy access across The Domain’s iconic 300-acre, live-work-play community.”

Bike rental will start at $1 to unlock a bike and $2 for a 30-minute ride. A yearly membership costs $80 for unlimited trips up to 60 minutes.

Those who are already members of Austin B-cycle will be able to join Domain BCycle at no additional charge, McFadden said. Austin B-cycle has 76 stations in the downtown core.
SHARE THIS STORY