Ask the Editor: Why does TxDOT use wire signal lights at some intersections and permanent fixtures at others? 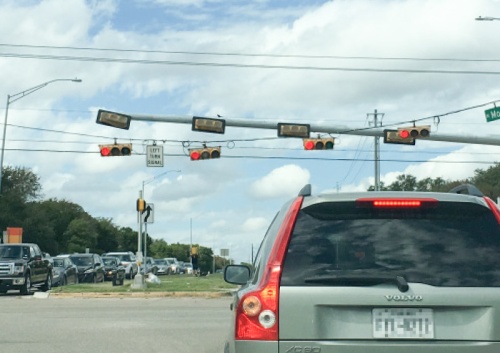 Permanent metal traffic signals were installed in early 2017 at the intersection of Braker Lane and the MoPac frontage roads.

The Texas Department of Transportation uses span-wire traffic signals, those wire-looking ones that swing in the wind, at intersections in construction zones and other short-term signals that could be replaced in five years. A TxDOT spokesperson said for short-term projects, span-wire signals are most cost-effective because the material is less expensive on the front end.

For longer-term projects, TxDOT installs more permanent metal arm signals because they require less maintenance, and the cables in the devices are more protected. The signals stay in place better and are less likely to move because of wind. Vehicle-detection devices, such as traffic cameras, can also be positioned over the travel lanes.

A recent example is TxDOT began replacing the span-wire traffic signals at the intersection of the MoPac frontage roads and Braker Lane this year.
SHARE THIS STORY