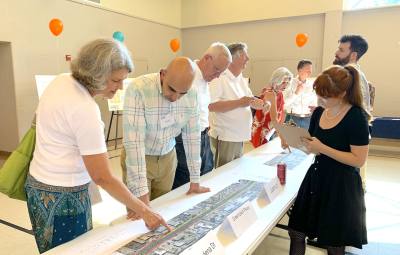 At a July 9 open house, city of Austin staffers go over updated design plans for Burnet Road improvements, which include adding a median to restrict left turns.

Proposed designs for how the city of Austin will spend about $53 million to improve Burnet Road include adding medians to restrict left turns, but that proposal has many business owners concerned the medians will have a negative effect.

Allan McMurtry—who owns AMC Co., which is a jewelry tools wholesaler on Greenlawn Parkway off Burnet—said several area business owners formed the Burnet Road Business Association as a result of their shared concerns over the median and negative effects of construction.

McMurtry printed off maps of Burnet and counted 197 businesses that front Burnet, and of those, he said 138 will not be able to have customers make left turns into their parking lots.

“It’s devastating,” he said. “When you start looking at the impacts of the road construction followed by the median it’s a double whammy.”

Mike Trimble, director of the city’s Corridor Program Office, which is managing the $482 million set aside from the 2016 mobility bond for improvements on nine corridors, said input from residents and business owners is key to the design of improvements.

“Making sure we have good, appropriate left-turn access on the corridor is a part of the analysis we have done, and we’ll continue to refine that as we get into the final design phase as well as looking at how can we still achieve our safety and mobility outcomes because that’s one of the primary reasons for putting in the medians,” he said.

City staffers will start to sit down with individual business and property owners to discuss any negative effects and how to mitigate them, Trimble said.

“We definitely want to make sure we keep our businesses viable,” he said. “One of our big outcomes is to support local businesses and keep those viable.”

Since the last open house in September, the city made changes to the median design as well as determined a path for the protected bike lanes and shared-use path that will run the entire length of the corridor between MoPac and Koenig Lane on both sides.

The goal of the bike lanes and path is not only safety but to encourage residents to walk, bike or use scooters for shorter trips along the corridor, and that could result in more support for local businesses, Trimble said.

“We won’t be taking any vehicle lanes,” he said.

Trimble said the city is aiming to seek construction bids for the corridor projects in 2021, although it is attempting to advance work at a couple of intersections. These include at Koenig, which is near Lamar Middle School and H-E-B. Trimble said improvements may include improved alignment and queueing for vehicles turning as well as pedestrian crossings.

“We’re definitely concerned about pedestrian crossings there, particularly with the middle school there,” Trimble said.

At Braker Lane, the city hopes to finish work before the new Major League Soccer stadium opens in March 2021. The city is proposing to add double left turns for each direction and improve pedestrian crossings.
SHARE THIS STORY