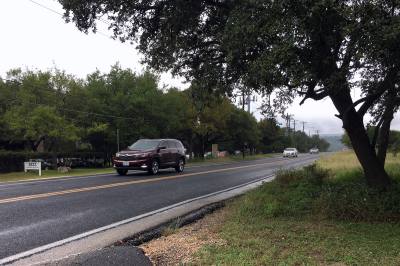 The city of Austin has a $17 million budget for improvements on Spicewood Springs Road as part of the 2016 Mobility Bond.

The city of Austin had anticipated releasing its draft recommendations to improve Spicewood Springs Road in Northwest Austin this spring, but the need for more research is pushing that release back to late summer.

The project is receiving about $17 million from the 2016 Mobility Bond for improvements between Mesa Drive and Loop 360. These could include expanding the road to four lanes and adding turn lanes, traffic signals, bike lanes or sidewalks.

City staffers announced May 22 that two items are affecting the schedule for releasing the draft preliminary engineering report with recommendations. The first is the need for a cultural resource survey to identify or rule out the existence of any archaeological resources in the project's limits.

Last fall, an official with the Travis County Historical Commission contacted the city about the possibility of historical sites and resources in the project area. Genest Landry, the project manager with the Austin Public Works Department, said the survey is being done to ensure workers will not discover anything after construction begins.

“We do not expect to find anything in our project limits, but we have been notified of potential historical resources,” she said. “They found a historical cabin, but it’s outside the project limits.”

The second item delaying the schedule is additional traffic modeling at the intersection of Spicewood Springs and Loop 360. Staffers want to take extra measures to see the impact of the Texas Department of Transportation’s project at that intersection to add an overpass or underpass. That project is also partially being funded by the city’s 2016 Mobility Bond.

The results of the new traffic modeling could also affect the city’s list of recommendations, said Emily Tuttle, a public information specialist with the Austin Transportation Department.

“We want [the recommendations]to be driven by the needs that we’re seeing,” she said.

After the city finishes the draft preliminary engineering report, staffers will host a public meeting to share the recommendations with residents and gather feedback. After that, staffers will begin the final design, which could take one to three years. Construction is expected to start in 2022.

Editor's note: This post was updated to correct the timeline for construction.

Round Rock ISD Board of Trustees votes to approve mask matrix

The Round Rock ISD Board of Trustees met to consider a mask matrix tied to color coded and numbered stages similar to systems established by Williamson and Travis County.

Board President Amy Weir said the TRO was filed by the two trustees two hours ahead of the Sept. 22 meeting.