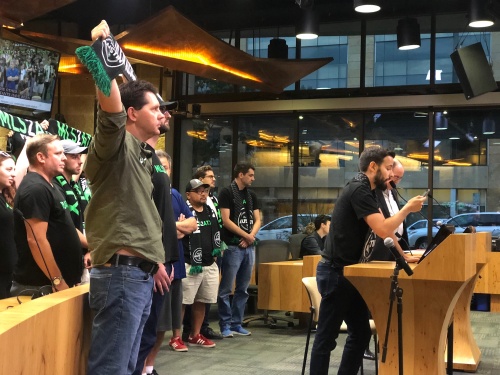 Derek Ensign speaks to Austin City Council with a group of MLS supporters during the council's meeting on Thursday, Aug. 9.

City Council took its final step in the process to bring a Major League Soccer team to Austin.

Council authorized city staff to negotiate and execute a stadium and lease agreement at McKalla Place in North Austin with Precourt Sports Ventures, the investor-operator group of the MLS team Columbus Crew SC.

PSV chairman Anthony Precourt thanked city council, the mayor, staff, and MLS in Austin supporters in a brief statement to media after the vote.

District 4 Council Member Greg Casar said he initially had concerns about the way cities handle professional sports deals, but the process answered his questions about equity and affordable housing, putting him in a position to support the deal. Casar said the deal council agreed to will give Austin something to rally around.

"My primary responsibility is helping folks survive and addressing inequality. I do think having something for folks to be proud of … is something our council should support," Casar said.

Alter, who represents District 10, said she believed the deal improved over time from the day PSV's proposal was first released in June, but "being the best of a bunch of bad deals" was not enough for her to support the item.

"For me, no matter how much one loves soccer, a soccer stadium is a want, not a need," Alter said.

City Council spent the majority of Wednesday morning's four-hour meeting tweaking elements of the term sheet, which first came in front of council at a meeting Thursday, Aug. 9. Instead of reviewing the amendments late into the night, council elected to postpone the vote to Wednesday to fully review each of the changes.

Before Wednesday’s meeting, PSV issued a response to each of the 28 amendments council had proposed to the original term sheet–accepting 10, rejecting 13 and issuing one “maybe” and four partial agreements.

Council brought those 28 amendments as well as some new ones Wednesday morning, working through the list throughout the morning until a final vote took place at 1:45 p.m.

PSV has agreed to fund the $200 million stadium, and the city will maintain ownership of both the 24-acre parcel of land at 10414 McKalla Place and the stadium—meaning PSV would not pay property taxes at the site.