After a decade of construction delays and fired contractors, city officials have closed the books on all major construction on the first section of the Northern Walnut Creek Trail in Northwest Austin. (Iain Oldman/Community Impact Newspaper)

After a decade of construction delays and fired contractors, city officials have closed the books on all major construction on the first section of the Northern Walnut Creek Trail in Northwest Austin.

“This has been a long project,” said Ana Seivert, the urban trails project coordinator for the Austin Public Works Department.

At a Jan. 28 presentation in front of the Austin Parks and Recreation Board, city officials declared the final closeout items on the trail to be substantially completed by the contractor.

Final work on the trail in the past year included replacing dead trees, repairing cracked sidewalk slab and addressing erosion.

“Those were warranty items under the contract,” said D’Anne Williams, project manager for the Austin Parks and Recreation Department.
RELATED STORIES

• Will they or won’t they? Austin restaurants split on when to open during coronavirus pandemic

The January declaration by city officials that work on the first phase of the Northern Walnut Creek Trail is fully completed marks the end of a decadelong stretch of work.

At the end of the Walnut Creek Trail project, one continuous, 19-mile trail will connect Balcones District Park in Northwest Austin to Govalle Neighborhood Park in East Austin.

The Southern Walnut Creek Trail runs from Govalle Neighborhood Park and stretches up to the Walnut Creek Sports Park at Johnny Morris Road and Daffan Lane. This section of trail opened in 2014 and is considered Austin’s first urban trail, according to the city’s website.

Austin City Council approved an initial design contract to build the Northern Walnut Creek Trail in 2003. The first phase of the project broke ground in 2010 after several setbacks—a contractor was let go shortly after beginning construction, according to City Council documents.

Before development of the project began, the city split construction of the Northern Walnut Creek Trail into three distinct sections.

The city in 2013 divided the first section of the trail into two phases, bisected at MoPac. Seivert said this decision came after Austin Water offered to build the trail from Balcones District Park to MoPac in conjunction with one of its projects in that area.

Community members and city officials opened the first portion of Northern Walnut Creek Trail in 2016. The first phase of the 12-foot-wide, paved trail is 3.2 miles long and runs from Walnut Creek Metropolitan Park to MoPac.

According to a presentation given to the parks board, construction on the stretch of trail from Balcones District Park to MoPac concluded in late 2018, but a one-year warranty checklist performed by the city found items that required correction from the contractor.

Several trees that were initially planted along the trail died after no supplemental watering was done. According to documents, 41 trees were replaced.

“We thought that putting trees in an existing park where they’d be accessible for contractors to water and keep healthy would be relatively easy. ... That was not the case. The contractor was not reliable,” Seivert told the parks board in January.

Problem areas in the trail’s infrastructure were additionally repaired in 2019. City documents show several cracks in the trail pavement were either filled or the cement trail panels were wholly replaced.

City staff identified problems with erosion along the shoulders of the trail, according to city documents.

Erik Harris, a Milwood neighborhood resident since 1994, said this is not the first problem with trail erosion he has seen since construction began. Harris said one issue with the composition of the trail is the city’s implementation of flex base, a course material made from finely crushed rocks.

“When you run water over [flex base,] the fine material washes out of it,” Harris said. “To me, it is not sustainable, and whatever runs off of it is pollution.”

The flex base materials run off into Walnut Creek, which runs adjacent to the Northern Walnut Creek Trail, Harris asserts.

Any material that runs off into the creek may be polluting a protected habitat for a local endangered species. According to maps from the U.S. Fish and Wildlife Service, the section of Walnut Creek that runs through Balcones District Park is a critical habitat for the Jollyville Plateau salamander. The USFWS considers this species of salamander as endangered under the Endangered Species Act, according to federal documents.

Seivert said the city has already removed some of the flex base material and replaced it with soil along the trail in Balcones District Park. In other sections of the park, the city is seeing native vegetation grow through the flex base and keep the base material in place.

Following the total completion of the first phase of the Northern Walnut Creek Trail, the city of Austin has its sights set on getting the next stage of trail under development soon.

The second phase will expand the trail, beginning at Walnut Creek Metropolitan Park, to I-35. Design work is almost complete for the project, and Seivert and Williams said the city expects to begin construction on this stage before the end of 2020. City documents show the trail is scheduled to open to the public by spring 2022. 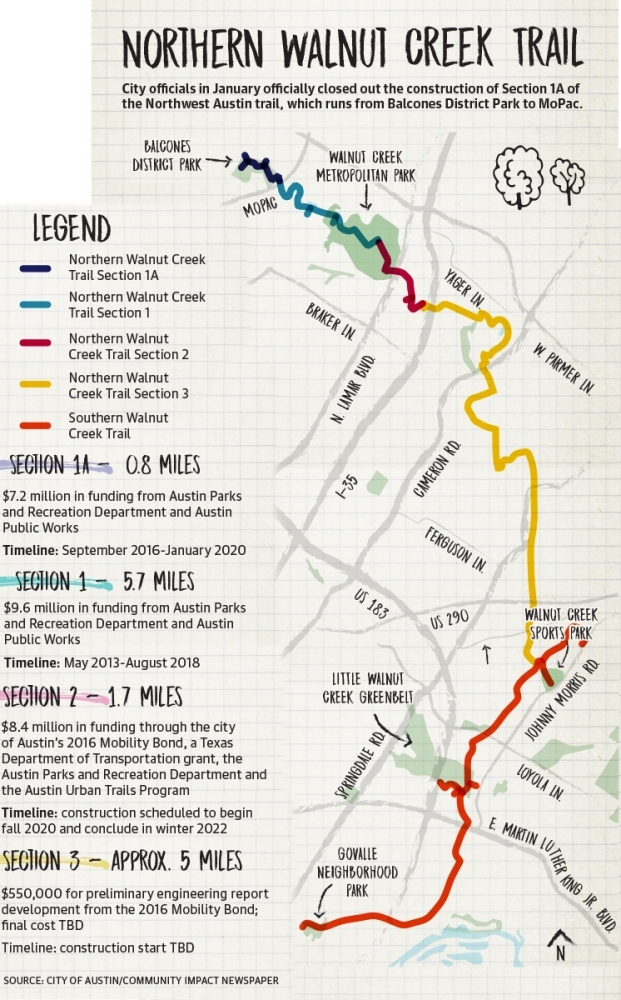 “It is a pretty big project with four bridges,” Seivert said.