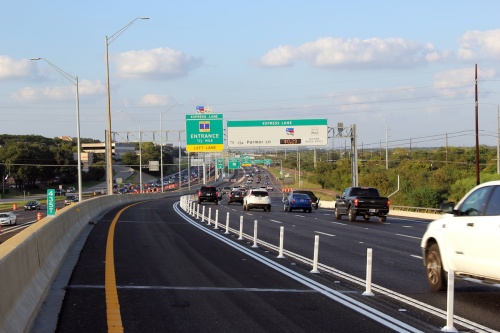 The southbound MoPac express toll lane is opening to the public Saturday, Oct. 28.

“This weekend marks a significant milestone for Austin commuters,” said Ray Wilkerson, chair of the Central Texas Regional Mobility Authority board of directors, in a news release. “With the express lane open to traffic in both directions, this innovative congestion management tool will be able to fully function as it was intended.”

The agency is still completing the installation of sound walls, and construction on those will not be complete until next summer, said Steve Pustelnyk, the agency's director of community relations.

Overnight lane closures, generally the right lane and/or auxiliary merge lane, will still occur so workers can install them. The agency also will make some adjustments to the existing walls and add a wall near the Westminster Manor senior living facility in Central Austin.

The agency also aims to review how its toll rates are set to avoid rate spikes, as many commuters experienced during the first week the full northbound express lane opened. The toll rate exceeded $8 for a brief period for the full lane from Cesar Chavez to Parmer.

Mobility Authority Executive Director Mike Heiligenstein said he thought toll rates would taper off after $5 and discourage drivers from entering the express lane.

“It’s clear that there’s enough demand that we’re revising our approach and trying to understand more about that demand and how prevalent that is,” he said.

The toll rate is set using an algorithm as well as traffic speeds and volumes gathered by cameras and sensors. However, in the first few weeks of operating the new lanes, staffers are also monitoring the rate and making adjustments as needed to keep the express lanes flowing at 45 mph.

Heiligenstein said increased demand, especially from vehicles entering the northbound express lane from south of Lady Bird Lake and from Cesar Chavez, is causing some issues with the toll rate spiking.

“We would rather see a gradual increase in price,” he said. “One day we shot up to $7.80 because we saw what was happening on the traffic coming from across the river and getting into that curve around The Domain.”

That curve near Duval Road has caused noticeable backups in the northbound express lane.

“I think it’s going to take a month for this to settle out in terms of usage and user behavior,” Heiligenstein said.

More than 85,600 transactions were recorded in the first week, exceeding Mobility Authority expectations.

Traffic was smooth on the first weekday rush hour Oct. 9 in the new northbound toll lane, but that Monday was a national holiday.

“We expected a slow start and people to try it out of curiosity,” said Tracie Brown, the agency’s director of operations. “It has exceeded our expectations.”

But the following weekdays brought reports of congestion in the express lane and high toll rates. On Oct. 10 resident Michael Holland called MoPac a “massive failure” around 5:15 p.m.

“As far as I can tell the toll lane is fine,” he said. “It’s the same design that I’ve used in Dallas, Houston and Los Angeles, where people know how to merge and don’t do sudden stops for no reason. However, people were finding a reason to come to a repeated dead stop in the toll lane.”