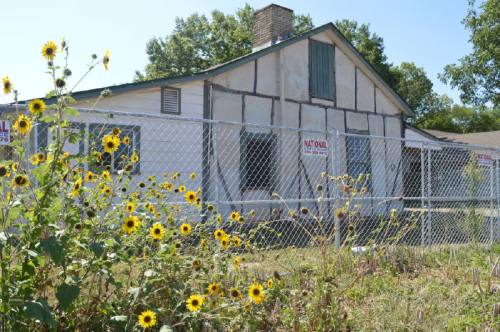 The Zimmermann house on Parkfield Drive, built in 1854, is the last remaining house in Austin to feature traditional German fachwerk architecture.n

When community members and local historians came to architectural specialist Tracy Hutson for her expertise to save the historic Zimmermann house at Parkfield Drive and Colony Creek Drive in North Austin, the property was in a dire state of disrepair.

Pegs connecting the house’s beams had slipped out of place, and the western wall of the house was failing and sinking away from the structure of the house, vulnerable to collapse.

Now, under the care of Hutson and the historical restoration architecture firm Hutson Gallagher, the house is up for state and federal funding and could soon be restored to its historical past.

“This is a really difficult thing to do. Historic preservation is a phenomenally expensive undertaking,” Hutson said. “Our restoration is going to get rid of all the modern aspects of the house. … It is going to require specialized craftsmen with knowledge of this antiquated system.”

The Zimmermann house in North Austin is one of the oldest houses in the city, according to Hutson. Edward Zimmermann, a German immigrant who arrived in Galveston in 1846 before settling in Central Texas, constructed the house on its current 7,500-square-foot lot in 1854—more than three decades before the current Texas State Capitol opened to the public.

Hutson said the five-room home is the sole remaining building in Austin with its original fachwerk architectural style. Traditional fachwerk uses fitted timbers with joints secured by wooden pegs. The architecture style came with Zimmermann from Germany—then a part of the Prussian empire—Hutson said.

Tracy and Christopher Hutson bought the property from its previous owner in October 2018. That owner had been in possession of the house for three decades, but the house fell into disrepair in that time.

“That is how historic houses are erased from Austin—demolition by neglect,” said Bill McGarry, a historian who previously collected materials on the Zimmermann property.

By early 2018, the city of Austin revoked the tax-exempt historical status from the house due to the owner’s failure to maintain its condition. The Hutsons were then able to purchase the property before it hit the market.

In order to apply for state and federal funding for restoration of the historic property, Hutson Gallagher is required to provide documented history of the house, including the history of the Zimmermann family and its architectural authenticity.

Now, for the first time ever, Hutson Gallagher has compiled a history of the Zimmermann family, including a timeline of when they arrived in Texas, when the cabin was built and who was born there—all based on verified, original historical documents. Previously, local historians leaned on an oral history of the house supposedly from the Zimmermann family, but Hutson said her team could not find an accurate basis for the majority of those claims.

Hutson said her team also found several components of the house from the 1850s still intact on the property, including paint samples and original fencing.

“One of the things was finding an original window in its original condition. The fact that it was so perfect … helped us date the addition in 1855,” Hutson said. “We can date lime-based mortar. You can find horse hair and pig hair in the mortar.”

Hutson Gallagher is still in the process of applying for funding and, as such, has no concrete timeline on the restoration process. The architecture firm, however, does have intentions to relocate its offices to inside the house after the restoration process and is looking to rezone the Zimmermann house from residential use.

“I would love to see this little house take its place in the community. It is responsible for everything around us,” Hutson said.

Note to readers: The original copy of this article spelled the Zimmermann family name as 'Zimmerman'. Some historical documents have used the 'Zimmerman' spelling, but Community Impact Newspaper has decided to correct its spelling in this article based on documents provided by Hutson Gallagher.