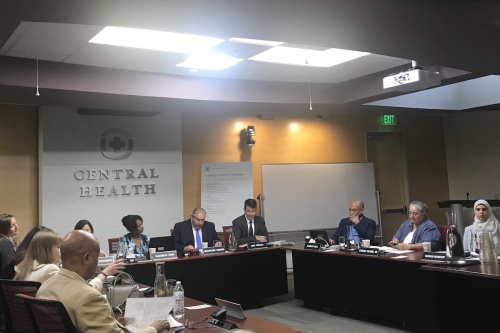 Central Health hosted the first of two public hearings on its FY 2019 budget on August 29.

The board of managers for Travis County’s healthcare district, Central Health, held its first public hearing on its proposed Fiscal Year 2019 budget Wednesday night and comments ranged from support for women’s health services and mental health services to frustration surrounding a lack of services in the Del Valle area.

Three Del Valle residents, one of whom is a Del Valle ISD trustee, spoke during the second public comment opportunity of the night, which took place prior to the beginning of the regular board of managers meeting. Each resident expressed concern that Central Health was not doing enough to provide services in Del Valle, an area of Southeastern Travis County that they said is home to many people displaced by Austin’s rising cost of living.

“I'm actually very disappointed in the amount of progress that has been done for our community, in the lack of services and just the overall timeline,” said Susanna Woody a Del Valle ISD trustee said.

A group of Del Valle residents filed a lawsuit in October 2017 against Central Health citing lack of services in the area.

The current clinic in operation in Del Valle, which opened in November 2017, is run through a partnership with Travis County and is open two days a week because Travis County uses the same facility for other purposes during the rest of the week, said Larry Wallace, Enterprise Chief Administrative Officer for Central Health.

Central Health CEO Mike Geeslin said while progress in the area has appeared slow, plans are underway to expand services and open clinics in Southeast Travis County in Hornsby Bend and Creedmoor and on Elroy Road. He said the board needs to keep future development in mind when considering trying to add a permanent Del Valle clinic as well.

“It could come down to, if we built them tomorrow, needing to scale one back or close operation at another because you're more or less competing against yourself with the same patient population and adding costs,” Geeslin said.

Among those praising Central Health during the public hearing were board members and supporters of Planned Parenthood of Greater Texas, students from The University of Texas Dell Medical School who work in the school's free downtown clinic, and Heather Alden, executive director of the SIMS Foundation, a local health non-profit for musicians.

Alden thanked the board for its support of the SIMS Foundation, which experienced an uptick in clients seeking services for opioid addiction.

“We have a national epidemic on our doorstep and musicians are the canary in the coal mine to what is happening all around us,” Alden said.

Residents can provide more input at the next public hearing at the Central Health Building at 1111 E. Cesar Chavez St., Austin on Sept. 5 at 5:30 p.m.