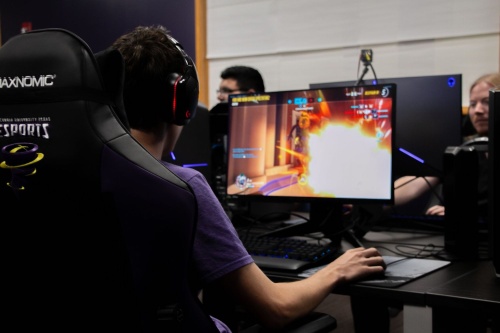 Aiming to get ahead of the curve on a national trend, Concordia University on July 30 opened the doors on the campus’ new esports arena, which will house the school’s first class of eSports athletes in 2019.

The competitive video gaming team is the first varsity esports team in Central Texas, according to school officials. In its first year of competitive action, Concordia esports coordinator Marc Valdoria said the university is expecting 25 students, mostly from Texas, to play for the university. Qualified students were offered a combination of merit-based and esports scholarships, according to a July 30 news release from Concordia.

“This is something that is completely new to [the students],” Valdoria told Community Impact Newspaper. “Seeing an actual arena built out for them motivated them to work on their game.”

Concordia’s new esports arena features 12 professional-level gaming stations and audio-visual production equipment, including production technology that allows the school’s esports team to live stream from any of the stations.

Student athletes on Concordia’s esports team will train just under 10 hours every week, Valdoria said. The team will likely compete in tournaments at the end of the year, when Valdoria said most tournaments on the esports circuit are scheduled.

Ronda Seagraves, associate vice president for athletics for Concordia, said the school will engage in research every year to identify which games the school needs to add to its program.

“We have to stay ahead of the game and understand what high school students are playing so we can recruit them,” Seagraves said. “We have got to watch, almost do a market analysis every year to see if we’re meeting the needs of what the students are playing.”

Concordia launched its esports program after drafting a strategic plan two years ago that challenged the school to stay competitive with its athletics program, according to Seagraves. The esports program fit the school’s needs, as the new arena didn’t require additional field or gym space.

Valdoria added he believes Concordia can stay ahead of the current and offer prospective students something that no other colleges in Central Texas can—a varsity esports team.

“We wanted to be on top of things because we didn’t want to get left behind with esports. If you’re not here now it is just going to leave you behind,” Valdoria said.
SHARE THIS STORY