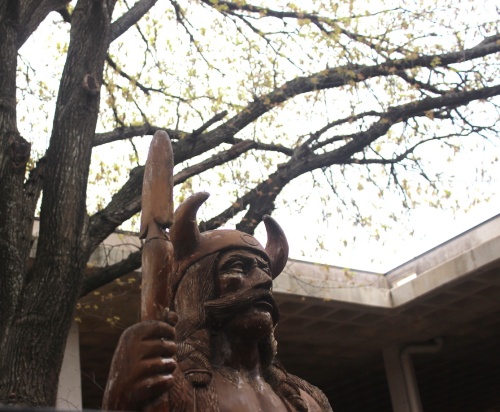 The Lanier High School Peace Garden statue features one of many plaques in the campus that mentions the school by name.

One week after trustee Ann Teich announced to the board she would not be bringing Sidney Lanier High School up at future meetings for a name change, some trustees and district staff met March 11 with Lanier student representatives and faculty to gauge community interest in the process.

Lanier High School is one of five Austin ISD schools selected in February 2018 to have its name changed due to the confederate ties of their namesakes. The board voted in 2018 to rename Fulmore Middle School after retired teacher Sarah Beth Lively and to rename the John T. Allan Facility after former Principal Anita Ferrales Coy. Last month, John H. Reagan High School was renamed Northeast Early College High School.

"I will not be bringing Lanier up as a name change until I know what the faculty and students at Lanier want me to do,” Teich, whose district represents Lanier, said at a board workshop March 5. “They are the ones more affected by this, and the alumni who continue to value the Lanier name, they are the ones who [would] have to pay [to change the name].”

While the student meeting was closed to media, students did speak before and after discussing the name with trustees. Student Council President Litzy Rodriguez said she along with many of her fellow students are against removing “Lanier” from the school’s name.

She said that students last year started a petition to drop “Sidney” from the official name but to keep Lanier. Students also considered other people with the last name of Lanier as options to replace the school’s namesake.

“Most of this school is minorities,” she said. “We know what it feels like to be discriminated and that's how some students feel because of the name [Sidney]. In reality that doesn't represent us. We don’t want to be linked to the confederate side [of the name].”

She said problems with the current school facility—including a lack of cover for students to walk under when it rains and bathroom stalls missing doors—should be addressed before money is spent to change a school name.

Sandy Romero, a senior at the school, said she too would like to see the money spent elsewhere at the school. She also said alumni and students feel pride and identify with Lanier High School.

"To us in the community, the name is more associated with our school, our community, our brothers and sisters that have graduated from here," she said. "It's us. We don't associate [the name] with the same thing [members of the school board] do."

Mohammed Alam, a senior and student council member, said it is rare to find students who are interested in changing the name entirely. While some may not mind a name change, he said most students passionate about the topic are in favor of keeping "Lanier."

"We have traditions here that have a good significance because of the Lanier name; we have class pictures and we have yearbooks that would change because of the name," Rodriguez said.

At the March 5 meeting, trustee Yasmin Wagner said she was disappointed in the board for not being able to complete a name change for the school over the past 13 months.

“Here we sit wringing our hands, wanting to go back, rehash the same conversations, talk to folks all over again in hopes of getting a different result,” she said. “I think there have been efforts to discourage progress in the conversation, which I find troubling because we made a decision as a supermajority of this board to move forward with that change.”

Trustee Jayme Mathias said any incurred cost to change one of the five school’s names is money well spent by the district.

"White supremacy is not an AISD value,” he said. “Institutional racism is not an AISD value, and so I'm happy to continue forward in the conversation of us as a board and a district taking a look at those schools that are named for slave owners and slave traders and to help educate the community.”