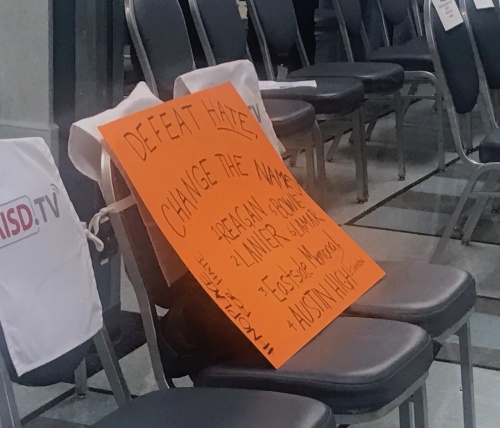 District 1 trustee LaTisha Anderson, who introduced the motion, noted the district chose to name the school after John. H Reagan in the 1960s as a statement against the Civil Rights Movement.

During public comment, Bryan Register spoke in support of renaming Reagan and urged trustees to use the name change process as an educational opportunity for the district. He also said he would support decisions to change James Bowie High School, Stephen F. Austin High School and other controversial names in the future.

“Instead of starting out with a listening session with people who have not received any education, let’s go to the schools and tell them something about these people [schools are named after],” he said. “Go to Bowie High School and say Colonel James Bowie bought and sold human beings by the pound, and then get an option. This needs to be educational.”

The topic of changing school names was first presented to trustees in November 2017, and the name changing process was officially approved Feb. 26, 2018. School Renaming Task Forces were created to submit final recommendations to the board in the fall of 2018.

In September, Reagan’s renaming task force suggested the district drop the first name and initial from the school's name and simply called it Reagan Early College High School. In a summary submitted to the board, the committee wrote dropping “John H.” from the name would honor “what the name ‘Reagan’ has meant to the school community, East Austin, and to the city at large since 1965.”

District 3 trustee Ann Teich, the lone vote against the Feb. 25 action, said it is important to remember that the school is 50 years old and the local community preferred dropping John H. from the name only. She also pointed to the cost involved in rebranding a school.

"It's important to know that those alumni, mostly white, who have been supporting Reagan for the last 30-40 years, will pull their support [if the name changes]," she said. "I'm hoping the community that is advocating for this [name change] will step up and they will provide the money that will be lost when the alumni take their support away."

Other trustees expressed a desire to continue the name change process the board previously approved for Sidney Lanier Early College High School and the district’s Albert Sidney Johnston campus. They also said the would like to add additional schools to the list in the future.

"It's time for us to right the wrongs of history," District 2 trustee Jayme Mathias said. "My estimation is that the naming of those three schools, Johnston, Lanier and Reagan, was an act of violence against the East Austin community at the time of the Civil Rights [Movement]. Once we learned about some of the really despicable things that John H. Reagan said, I have a feeling that it's much easier for us to say it does not represent Austin values.”